In Iowa, a marriage-equality anniversary 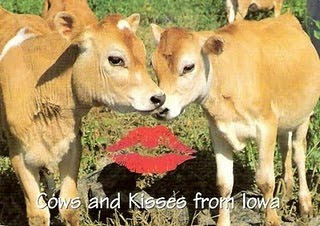 One year ago today the Iowa Supreme Court handed down its unanimous decision in Varnum v. Brien, paving the way for gay and lesbian couples to get married.
So happy anniversary for marriage equality in the Hawkeye State!
You've shown that the freedom to marry isn't something that matters only on the coasts. It's an American issue, an issue of fairness.
A Des Moines Register poll in September found that 92 percent of Iowans said same-sex marriage had brought no real change to their lives. But they were evenly divided on whether they'd vote for a constitutional amendment barring it.
The folks at One Iowa are at the forefront of efforts to safeguard the rights of gay and lesbian citizens. So far, lawmakers have resisted attempts to overturn the court's ruling, which struck down a law banning same-sex marriage as unconstitutional.
I like what Iowa Gov. Chet Culver had to say this week. While he personally believes that marriage should be between one man and one woman, he says his personal views shouldn't infringe on the civil rights of others.
"I think the overwhelming majority of Iowans do not want to amend our constitution in such a way that's discriminatory. That's the bottom line. Iowans want to move forward and the Supreme Court has spoken loudly and clearly. I think it's time to move on."
Sure, it would have been nice if Culver had experienced a change of heart over the past year - and I hope he's had a chance to meet some of his fellow Iowans who've tied the knot.
But what's more important is the distinction he draws between his personal beliefs and public policy. We're free to believe what we want but we don't have the right to enshrine discrimination into law or deprive our fellow citizens of their civil rights.
While same-sex marriage hasn't affected the lives of the vast majority of people in Iowa, it's obviously had a great impact on the gay and lesbian couples who have been able to get married. It has made them more secure and better protected as they plan their lives together.
Expanding civil rights to groups that have historically been denied them only strengthens our society. All of us who have care about making the United States a more just and equal place have something to celebrate today.
Posted by Esther at 9:45 AM

"But what's more important is the distinction he draws between his personal beliefs and public policy."

Amen sister. I know of a couple hundred thousand Mormons who need to get that idea through their thick celestial-underwear laden skulls. They should take a page out of the Jehovah's Witnesses' book and refuse to vote. They shouldn't want to take part in this world's government since all they really care about is what comes next.

Hey CP, thanks for the comment. Sorry I was so late getting back to you. Yeah, it amazes me how many people don't understand that your personal beliefs and public policy are two completely different things. We shouldn't be legislating our religious views.