At the Pentagon, remembering 9/11 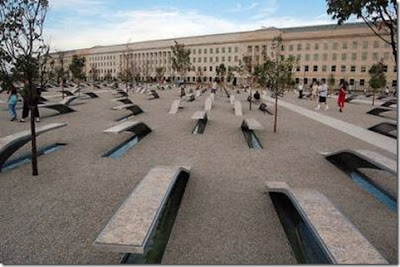 One thing I didn't mention when I wrote about my trip to Washington, D.C., is that a friend took me to see the very moving Sept. 11 memorial at the Pentagon.

This was my first time on the grounds of the Pentagon, so it was interesting just from that perspective. The memorial is a place for quiet reflection and honors each of the victims. It's a simple design, yet one that contains levels of meaning.

Completed in 2008, the memorial is adjacent to the side of the building where American Airlines Flight 77 crashed about a half-hour after takeoff from Dulles Airport. You can see that the Indiana limestone used in the repairs is a slightly different shade.

Designed by Keith Kaseman and Julie Beckman, it consists of 184 benches, each cantilevered over a pool of water and illuminated at night, and inscribed with the name of a victim. They're arranged according to the age - the oldest was born in 1930 and the youngest in 1998.

For some reason I had thought the memorial was only for people who worked at the Pentagon, so I asked my friend whether there had been a daycare center. He said no, it was for all the victims, those on the plane as well.

That really touched me - civilians and military personnel, adults and children who were on the plane, all remembered together. And the memorial is open to all - 24 hours a day, no security checkpoint to go through to get on the Pentagon grounds.

Fifty-nine of the benches face one way and 125 the opposite way, depending on whether the person was on the plane or at the Pentagon that morning.

In an interview with The Washington Post about building the memorial, Kaseman said that visitors won't find any brochures or interpretive material because the terror attacks were an attack on freedom of thought. (Although if my friend hadn't known the background, a lot of the deeper meaning would have escaped me.)

"We wanted to invite people to think but not tell them how to think or what to feel," Kaseman said. "The memorial gives you enough of a story to set you on your own process of discovery and interpretation."

Here's a CBS News segment on the memorial, including interviews with the designers:

You know, I assumed there was probably a memorial at the Pentagon, but since so much of the 9/11 focus is on Ground Zero in NYC, I have never heard about the one in D.C. It's quite lovely and hearing your description of it, it sounds very touching. I'd be interested in seeing it in person.

Yeah, I think New York gets a lot of the attention, partly because more lives were lost there and partly because rebuilding is still a work in progress. I was glad my friend suggested we stop at the Pentagon. I didn't know anything about the memorial either.

In the past, a memorial was a memorial - a plaque with names or an imposing statue. I think today, designers really put a great deal of thought into levels of meaning and that made it more interesting and poignant.

What a beautiful memorial. Thanks for sharing.