Jerry Zaks on theatre and religion

I'm catching up with the American Theatre Wing's Downstage Center interviews and I love this quote from director Jerry Zaks as he talked about the 1992 Broadway revival of Guys and Dolls:

"The most important thing to me in any of these productions is the transmission of joy of some sort, or some sort of ecstatic experience. 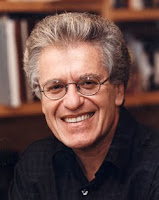 "In temple when I was a kid, the happiest moment was at the end of service - a) because it was the end of the service but b) because everyone stood up and sang and it was ecstatic. We sang, and it was joyous.

"I've always wanted my productions to perform the same function as going to a good service would. Now, I'm not comparing faith in God with the theatre but you know what, sometimes I think it's more powerful."

While it's been a long time since I've attended synagogue regularly, I know what Zaks is talking about - I remember the melodies from childhood. There's something about singing in unison that's joyous and truly gives you a sense of community.

Of course theatre usually isn't participatory in the same way as a religious service - although going up on stage at the Hirschfeld Theatre on Broadway at the end of Hair certainly was an ecstatic experience for me.

I've had other powerful moments at the theatre that I'd compare to a religious experience.

I was in tears hearing "For Good" the first time I saw Wicked, on tour. And Patti LuPone's "Everything's Coming Up Roses" in Gypsy at City Center was rapturous - the only time I've been part of a mid-show standing ovation.

There's something about being at a live performance that you can't replicate watching a movie at the multiplex or sitting at home on the couch with the remote.
Posted by Esther at 11:00 AM

Just to hear you describe your emotional responses to live performances makes me tear up.

As I've mentioned many times before, my first Broadway show was the ill-fated 1983 revival of Mame. After "Bosom Buddies," the audience stood for Angela Lansbury and Anne Francine's performance of that showstopper. Imagine my surprise that I never got to stand mid-show again! Well, not until Patti LuPone did "Rose's Turn" on Broadway, that is! Once every 25 ears or so sure makes it special!

And you are so right - there is nothing like the feeling of live performance!

Thanks for the comment, Jeff. It is pretty incredible to stand up mid-show. After "Everything's Coming Up Roses" I turned to the person next to me and said "that was amazing." His response was, "Just wait," because "Rose's Turn" was yet to come!