Music to benefit The Trevor Project

A cast recording I ordered arrived in the mail today - always a happy occurrence.

This time, it's the 2003 Broadway revival of Nine, a musical that makes me wish I'd become a theatre fan earlier so I could have seen it. 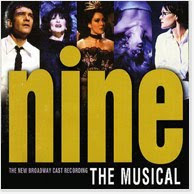 What a cast: legendary dancer Chita Rivera, the very sexy Antonio Banderas, Laura Benanti, from Gypsy, and Jane Krakowski, whom I've gotten to love on 30 Rock. As usual for a PS Classics release, the accompanying booklet has been lovingly assembled with photos, an essay and lyrics.

It's one of those recordings that I'd see every once in awhile when I was thumbing through the Broadway CDs at Borders or Barnes and Noble but never picked up, until now, when I had the perfect reason.

I bought it directly from the label because through December 31, for all CDs purchased through the website, PS Classics is donating half the profits to The Trevor Project, the leading national organization focused on crisis and suicide prevention efforts among LGBT youth.

And tomorrow, I'm going to download "It Gets Better" from iTunes, a song written by Jay Kuo and Blair Shepard and recorded by a group of young Broadway performers. All proceeds will benefit The Trevor Project.

Lastly, I've also made a personal donation because it's crucial that kids who are being physically or verbally bullied - or both - have someplace to turn if they can't get help at home or school. They need to know that they will survive and their lives will get better.

And it does get better. I know that from listening to the stories of my friends who happen to be gay or lesbian. I'm so happy that they're here and so blessed to have them as a part of my life.
Posted by Esther at 8:30 PM

Labels: It Gets Better, Nine, The Trevor Project