NFL to Lombardi: Be Italian 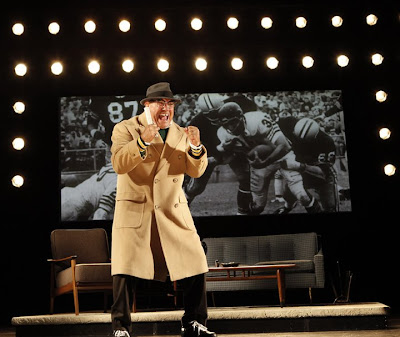 I'm looking forward to seeing Lombardi on Broadway in November and I've read good things about the performance Dan Lauria delivers as the legendary coach of the Green Bay Packers.

There's an interesting interview with Lauria in New York magazine about his background and what he did to prepare for the role. I have to admit I was a bit taken aback when he talks about how he got the part:

He says the theatre owners didn't want him - they would have cast Julia Roberts to sell tickets. "The NFL was adamant about having me - they wanted an Italian and they wanted someone who played football."

Lauria goes on to say that he doesn't think Lombardi would have been mounted without the involvement of the National Football League, which is a producer and has put its marketing power behind the show.

Now, I can understand the NFL wanting to read the script before giving its seal of approval to a play about the man whose name is on the Super Bowl trophy. I can even understand the league's desire to want someone in the role who's played the game, although I don't agree with it.

But I think a creative team is on the proverbial slippery slope when it casts an actor based on ethnic background, disregarding those who don't fit the bill. (And does this mean Italian actors can't play non-Italian roles? Because someone should tell Al Pacino.)

I've never seen Lauria in anything - not even The Wonder Years. I'm not disparaging his acting ability. In this case, I guess it was a happy coincidence that he's Italian-American and played football in college and knew the director, Thomas Kail.

Honestly though, none of that will matter when I see Lombardi. All I care about is whether Lauria creates a memorable character onstage.

And I'm not trying to sound naive about how these decisions are made. Casting a Broadway show is probably a lot like making sausage - I don't want to know everything that goes into it.
Posted by Esther at 12:45 AM

Laurence Olivier told Dustin Hoffman during the filming of Marathon Man "It's called acting for a reason." (Or "Try acting dear boy...it's much easier." Whatever or whichever if ever it actually happened.) The meaning being, I think, if you're a good actor you shouldn't have to be Italian or a football player to perform as Lombardi. This reminds me of the brouhaha over gays not being able to play straight. The man who wrote that is incredibly naive. Maybe the NFL is, too.

Thanks for the comment! I saw Laurie Metcalf give a tremendous performance as a Jewish mother in Brighton Beach Memoirs, so I definitely agree.

The NFL's reaction was kind of understandable if you don't think a lot about what it is that actors actually do. I mean, someone playing Vince Lombardi - the knee-jerk reaction is that he has to be Italian and know something about football, right?!

Also, I thought the interview offered an interesting window in the clout that a producer can have - especially one as vital to your play as the NFL is to Lombardi.