Tony-winner Joseph Stein, who wrote the book for Fiddler on the Roof as well as many other Broadway musicals, died Sunday in New York at age 98. 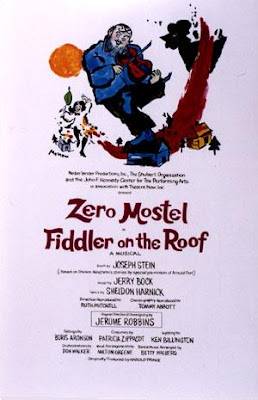 As I've mentioned before, I have an unusual history with his most famous work. I saw Fiddler on the Roof for the first time in Israel, in Hebrew, with Chaim Topol as Tevye.

In fact at the time, in 1998, I think I might have been the only Jewish person who'd never even seen the movie, for which Stein wrote the screenplay. (Okay, maybe a slight exaggeration.)

I was always kind of dismissive, believing (wrongly, I admit) that it would be schmalzy, romanticizing the harsh life of Jews who lived in the shtetls of Eastern Europe.

Of course I ended up loving my first experience with Fiddler on the Roof. I knew enough of the plot to follow what was happening, even if I didn't get all the jokes. And I recognized the melodies - even if I didn't understand all the words. It was so poignant that I remember being in tears at the end.

But the richness of the characters and the warmth and humor in Stein's portrait of Jewish life, based on the stories by Sholem Aleichem, didn't truly come through until I saw it on stage a second time - in English - in 2009.

As Tevye would say, may his memory be blessed.

Update: Fiddler on the Roof's composer, Jerry Bock, passed away Nov. 3 at age 81. He wrote the music for many other shows, including another of my favorites, She Loves Me.

If you're interested in what Bock and Sheldon Harnick's songs sound like in Hebrew, here's a medley from a 2008 production by Tel Aviv's Cameri Theatre: