Kevin Spacey, now a Commander of the British Empire 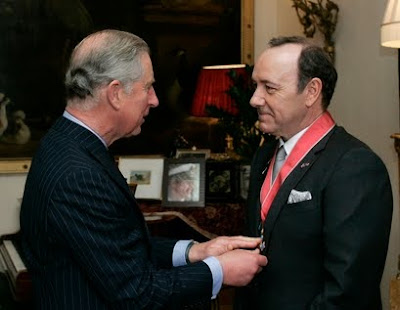 Congratulations to Kevin Spacey, artistic director of London's Old Vic Theatre, who was presented an honorary Commander of the British Empire today by Prince Charles for his services to drama.

"He (The Prince) was just extraordinarily generous about the work we've done at the Old Vic over these past seven seasons that I've dedicated myself to the revival of this brilliant, wonderful theatre and for all the belief that I have that arts and culture are a hugely important part of our lives."

Kevin's had his share of criticism in the beginning of his tenure and not all of the plays he's chosen have been successful. But things have begun to turn around. The theatre has won praise for its education and outreach programs and for fostering new talent.

I have to admire him for taking on the financial challenge of running a commercial theatre, opening it up to young, diverse audiences and for taking risks with productions like the revival of The Norman Conquests.

He told Britain's The Stage in 2006, "I’m here trying to build something that is bigger than me and I want to have last long, long, long after I’m gone.”

Of course I have a personal connection, too. I will be forever grateful to Kevin for a gracious note he sent me in response to a fan letter I wrote. The chance to see him on stage in A Moon for the Misbegotten was the impetus behind my first trip to Broadway.

Hopefully I'll get to see him again when he returns to New York in 2012, to play the title role in Richard III at the Brooklyn Academy of Music. He's one of the few actors for whom I would gladly lift my Shakespeare moratorium.
Posted by Esther at 8:15 PM

May I ask which address you sent your fan mail to?

Hi Crio, I just sent it to him in care of the Old Vic Theatre in London. The address is: