The Scottsboro Boys to close on Broadway

The Scottsboro Boys is closing on Dec. 12, six weeks after opening night? I just can't believe it. I'm crushed.

According to Playbill, producers Barry and Fran Weissler and Jackie Barlia said:

"It's a show we felt we had to produce and we're proud and grateful to have brought this last great musical from Kander & Ebb to Broadway. We encourage anyone who loves challenging, provocative and original new musicals to see us in our final two weeks at the Lyceum."

Well gee whiz guys, if you felt you had to produce it couldn't you at least have given it a chance to build an audience? Doesn't a challenging, provocative work need time for the buzz to spread? Couldn't you plow some of the profits from Chicago into it to keep things going a little longer? 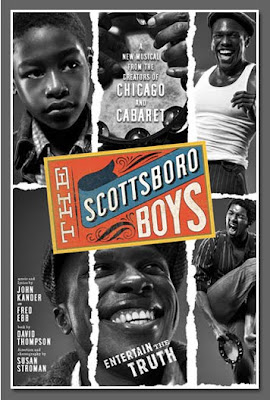 Like I said in my review, The Scottsboro Boys is a thoughtful, tuneful and powerful story about injustice. It gives voice to a group of 1930s Southern black men in a way that I found original and compelling and entertaining in the highest sense of the word. It also brilliantly uses the format of a minstrel show to illuminate the era's racism.

I have to wonder if we're seeing a trend toward quickly pulling the plug on a show.

It happened last fall with the revival of Brighton Beach Memoirs and last week with Elling, both of which closed a week after opening night. The Weisslers also produced the British play Enron, which had a very short life on Broadway this spring.

Are these shows so undercapitalized that they're basically being fronted on a wing and a prayer? (The Scottsboro Boys played to 59.8 percent capacity last week, with an average ticket price of $63.43.) Sometimes I think there's the mentality that we'll throw up a show and see if it sticks. If not, we'll get out quickly and move on to the next one.

Compare that with Passing Strange, which I don't remember exactly burning up the box office but the producers, including The Shubert Organization and Elizabeth McCann, at least kept it going for five months, through the Tony Awards. It won Best Book of a Musical and now has an afterlife in regional theatre.

Or Memphis, which started out slowly but has built an audience since winning the Tony for Best musical. Or Next to Normal, another musical about a difficult subject that will have been on Broadway for nearly two years by the time it closes in January, and has just started a national tour with Tony winner Alice Ripley. Or Fela!, another innovative musical, about someone little-known to most Americans, that's concluding after just over a year on Broadway.

I feel bad for the incredibly talented cast of The Scottsboro Boys, as well as for the rest of the creative team. Your work - hilarious, insightful, heartfelt - moved me so much. It was a thrilling and memorable evening of theatre.
Posted by Esther at 2:30 PM

A crushing blow, indeed. A sad reminder that it is more about the "business" than the "show" in "show business."

I wish there was more time to see it again!

I know. I was in the front row, right in back of the conductor. It would have been better to be a little farther back but I'm kind of happy now that I saw it up close! I'll always remember hearing Joshua Henry sing "Go Back Home" and thinking, I'm hearing a classic Kander & Ebb song on Broadway for the first time. Just thrilling.

I think in days gone by, costs were lower and profits were higher and "rainy day" funds kept things afloat longer. Today it's do or die from day 1 (or even earlier!). Better a short run than no run at all, is all i can say about this one.

Thanks for the comment, Doug. That makes sense. There really doesn't seem to be much of a financial cushion. And obviously, the nature of Broadway has changed - it's tourist-driven now. I'm glad The Scottsboro Boys had a short run and I hope at least it'll be Tony-eligible.

Not just theatre. Even TV. Fails on first try? Gets cut.

What's with this quick cut attitude? Did they forget that many hits (in theatre and TV) have started slow but eventually built an audience? Sheesh.

"Well gee whiz guys, if you felt you had to produce it couldn't you at least have given it a chance to build an audience? Doesn't a challenging, provocative work need time for the buzz to spread? Couldn't you plow some of the profits from Chicago into it to keep things going a little longer?"

This is exactly what I thought. I absolutely meant to see it, but there's no way I'll get a chance before the 12th. I hope this isn't the beginning of a new trend.

Hey Vance, thanks for the comment! Yeah, you're right about TV. I guess there are a lot of shows that get pulled after only a few episodes. Seems like there's no patience for anything these days.

Thanks for the comment, Leigh. I'm so sorry you won't get to see it. I don't get to New York a lot so I guess this is a reminder that when I pick my shows, I have to think about what might not be around for very long. I lucked out with The Scottsboro Boys and with Brighton Beach Memoirs. I might not be so lucky next time.