That Girl and Funny Girl

The actress Marlo Thomas and the musical Funny Girl are both headed back to Broadway. The former will appear this fall in Relatively Speaking and the latter in 2012 featuring Lauren Ambrose as Fanny Brice, a role made famous by Barbra Streisand.

Here's a Broadway marquee mystery that involves both of them. 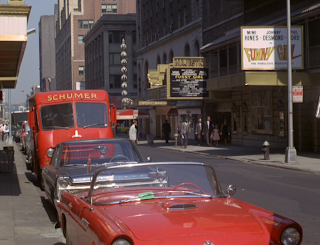 One of my favorite TV shows growing up was That Girl, starring Thomas as an aspiring actress struggling to make it in New York City. But despite the scenes of midtown Manhattan in the opening credits, the show was filmed in California. 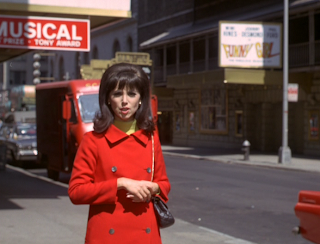 Every year, though, the cast and crew came to New York for location shooting. You can see some of the footage from that first season, 1966, in the DVD extras, along with a commentary by Thomas and co-creator Bill Persky.

A couple of frames grabbed my attention. The first shot shows the Broadway marquee for Funny Girl. This was apparently after Streisand left and Mimi Hines had taken over as Fannie Brice.

The next shot shows Thomas standing across the street under another marquee. When I saw it I immediately thought: What was that musical? There two clues, Prize and Tony Award. Can anyone guess?
Posted by Esther at 8:29 PM

Since Hello, Dolly! had won the Tony Award for Best Musical and was running in 1966 at the St. James Theatre, which is across the street from the Majestic, I'm going to guess Hello, Dolly!. (And if it is Hello, Dolly!, that other award might be the Drama Critics Circle Award.)

You are correct! Wish I had a prize to give you. Will you settle for my admiration of your musical-theatre knowledge?! I was thrown by the "prize." I was assuming Pulitzer but I guess I was wrong. ;-(

No prize needed! I thought it was Pulitzer Prize at first, but by that time How To Succeed... had closed, so I realized it couldn't have been a Pulitzer prize winning musical. The Drama Critics Circle Award is a pure guess, though. That's the only other award I know of that Hello, Dolly! had won by that time. (I reviewed a production once and did a lot of research before seeing the show.)

Esther, is Monica Reida 'that girl' who gets everything right?

Cool post and I'm intrigued by Lauren Ambrose in the role of Fanny Brice. Ought to be interesting.

Great post. I've noticed this in the opening as well. I love the episode in which she's at Sardi's and Ethel Merman is there. Such fun!