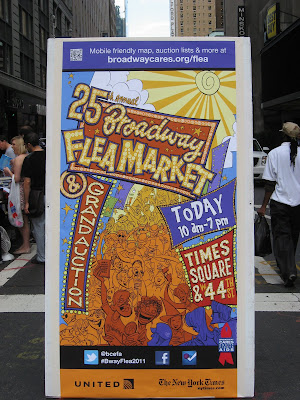 After spending a week obsessively checking the forecast on my iPhone, Sunday turned out to be a beautiful sunny day in New York City. It was perfect weather for attending the 25th annual - and my first - Broadway Flea Market.

This year, the Flea Market and auction raised a total of $547,658 for Broadway Cares/Equity Fights AIDS, which supports organizations around the country that provide services for people with HIV/AIDS, as well as other critical health issues.

Tables for many Broadway and some off-Broadway shows, as well as organizations like TDF, Broadway Impact, Dancers over 40 and Actors Equity, were set up along 44th Street between 7th and 8th Avenues. The Flea Market also spilled over into part of Times Square. You could find old Playbills, cast recordings, books, posters, show jackets, costumes, baked goods and just about any kind of Broadway-related tchotchke imaginable.

I wish they'd been able to spread out even more because it became harder and harder to get to the tables as the day went on and the crowd grew larger. Although I guess they like to keep these things in relatively compact areas and there are several Broadway theatres on 44th Street, so it makes sense. 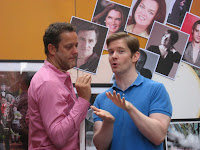 I had planned to attend one of the autograph sessions with Broadway actors that they held throughout the day but the lines were just too long. I wanted to spend my limited time browsing. I did spot Tony nominee Rory O'Malley, from The Book of Mormon, a musical I hope to see someday, if I can ever get a ticket! Hope he's still in it when I do!

One thing I'll keep in mind for next year is that you really have to spend some time digging through the tables. You can't see everything with a cursory look and when I read about some of the things other people found, I realized that I missed a lot! I'm also going to bring more money. While you can use a credit card, cash is faster and easier. 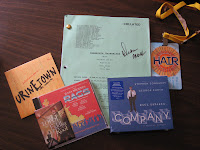 I ended up spending $51. Here's a picture of my haul. (It doesn't include the very tasty homemade cookies from the tables for Wicked and How to Succeed in Business Without Really Trying, which I consumed immediately, and a raffle ticket for a chance to win tickets to 5 upcoming Broadway shows.)

My favorite purchase was a Desperate Housewives script autographed by Debra Monk, who had her own table of stuff she was selling. I'm a big Desperate Housewives fan and I love Monk from the musical Curtains. I'm planning to get the episode on dvd and watch it while I follow along! Or I may just sit with it in Starbucks and pretend I'm an actress learning my lines.

Also, my advice is if you see something you like and it only costs a dollar, buy it because it may not be there when you come back. The Fiddler on the Roof magnet and HAIR Summer of Love 2011 pass were only $1 apiece and they're great souvenirs from two of my favorite musicals.

And if anyone at BCEFA is reading this, two things I could have used at the Flea Market were food and water. 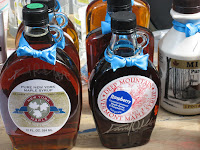 Except for Billy Elliot's grandma's sausage rolls, most of what I saw were cookies and cake and brownies. (Not that there's anything wrong with that!) They were delicious but I had to leave the Flea Market to get something more substantial, which I didn't want to do. And if anyone was selling water, I didn't see it.

It would have been great if the How to Succeed crew had whipped up some pancakes and waffles to go with the bottles of maple syrup autographed by Daniel Radcliffe! (And they're wearing little blue bow ties just like the ones Dan wears in the show. Adorable!) Or maybe souvlaki from Mamma Mia! or Memphis barbecue. I would even have tried a Vegemite sandwich from Priscilla Queen of the Desert.

Anyway, I'm so happy I could be a part of another Broadway tradition. I bought some great souvenirs. I had a great time meeting up with some of my fellow bloggers and people I follow on Twitter. It was the perfect way to cap a wonderful weekend in New York City.
Posted by Esther at 7:30 PM