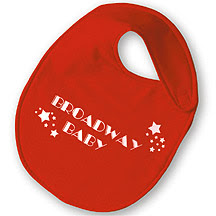 Has there ever been an actual Broadway baby? I'm not talking about a talented child performer but a real, live infant in a Broadway show.

I was so taken with seeing a baby in Porgy and Bess at the American Repertory Theater. Simply adorable! Since the musical is moving to Broadway in December, I'm curious about whether New York State has ever allowed a child that young to appear onstage.

Two children alternate in the role, Nile and Mackenzie Lee, the twins of cast member NaTasha Yvette Williams. (I remember her fierce Sofia from The Color Purple.) There's a note in the program that says they appear by permission of the Office of the Attorney General, Commonwealth of Massachusetts.

I've seen plenty of young kids in Broadway musicals: Mary Poppins, The Lion King and South Pacific, to name a few. Usually they've been old enough to walk. I think the youngest was the little boy who played Coalhouse Walker III in Ragtime but he only appears at the very end. For the infant Coalhouse, they used doll. (And they switch to a doll for Porgy and Bess, too).

I did a quick check of the Internet Broadway Database and found that there have been 18 Broadway performers named "Baby," 22 productions with the word "baby" in their title and numerous songs, including "Broadway Baby" from Follies. But I couldn't find any birthdates. And many of the actors date from the early 20th century. Baby seems to have gone out of style as a nickname.

Google wasn't much help when I searched for the youngest Broadway performer. All I could come up with were the youngest Tony winners: Frankie Michaels, 10, for Mame in 1966 and Daisy Eagan, 12, in 1991 for The Secret Garden.

I hope Nile and Mackenzie get to make their Main Stem debut. They'd look great at the Tony Awards wearing this.

You should post it as a question to Playbill! AskPlaybill@Playbill.com

Great idea, thanks! My guess is there have been. And it did make things seem so authentic. I know you're supposed to use your imagination at the theatre, yada, yada, yada. But there's nothing like watching parents sing to a real baby.