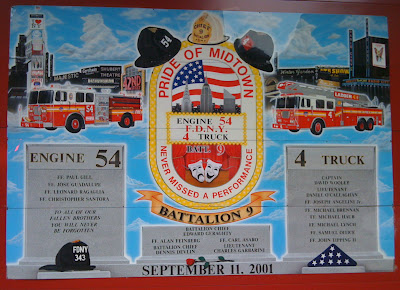 The events of Sept. 11, 2001, were a bit distant to me, geographically speaking.

I'd never spent much time in New York City and although I'd often visited friends in Washington, D.C., I had never been to the Pentagon. (I'm not sure they give tours.) So despite seeing the pictures and TV news footage, I didn't really have a good sense of exactly where the terror attacks had occurred.

Since then, I have spent a lot of time in New York. I've visited ground zero, St. Paul's Chapel nearby, and the fire station closest to where the twin towers of the World Trade Center once stood. I've been to the Sept. 11 memorial at the Pentagon.

Seeing those places has given me a deeper perspective on the horrific events of that day. I can picture the route people would have taken to get home from Lower Manhattan, covered in ash and with smoke billowing behind them. Pictures of crowds streaming across the Brooklyn Bridge have new meaning because I've walked across that same bridge. I have an idea of the enormous size of the Pentagon. I saw the spot where American Airlines Flight 77 struck the building and how it's been repaired.

But more than that, seeing the tributes - at fire stations to fallen comrades, on the grounds of the Pentagon, at a park just off the ferry on Staten Island - also makes the human toll much more personal for someone like me, who didn't know anyone who perished.

I put together a few pictures I took in Lower Manhattan in 2007 and 2008: on Wall Street, at ground zero, a fire station and St. Paul's Chapel. I'm not really a visual person but they're my small attempt at a tribute to the people who lost their lives 10 years ago today. Rest in peace.

In a couple of weeks I'll be heading back to New York City for a long weekend. I'll take in some of the shows opening on Broadway this fall. A city that I once didn't know at all, and which totally intimidated me, has now become one of my favorite places to visit.