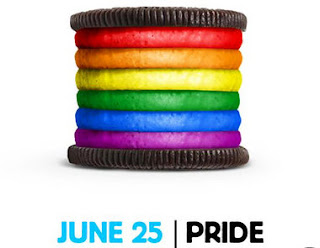 I'm not surprised that the haters came out in force when Oreo posted a picture on its Facebook page of a rainbow-themed cookie to celebrate Gay Pride Month. (Sadly it's only an illustration, not a real cookie.)

The nasty comments were what you'd expect but there was one that really irritated me. It went something like this: Why would a company risk alienating 97 percent of (presumably straight) consumers to curry favor with the 3 percent who might be gay or lesbian.

That argument is particularly insidious because at first glance, it sounds logical. What business wants to anger 97 percent of the people who might buy its product? But it has the effect of marginalizing the other 3 percent by setting them apart from the rest of America. It's divisive and demeaning.

(I wonder whether this person thinks it's a mistake for supermarkets to cater to Jews with displays of matzo and gefilte fish during Passover? Jews are even less than 3 percent of the population. And you know about the special Coca-Cola we get, right?)

Beyond that, the argument is 100 percent wrong because it ignores just how much American attitudes toward homosexuality have changed. This is not 1960, when gay people were forced to live furtive lives in the shadows of society or pretend that they were straight.

Surveys show an ever-increasing number of straight Americans have someone in their life who's gay or lesbian. And knowing someone who's gay translates into greater acceptance. The younger you are, the more likely that's true. So thinking about what Oreo did in terms of 97 percent versus 3 percent is a total fallacy.

A spokesman said that Kraft "has a proud history of celebrating diversity and inclusiveness. We feel the Oreo ad is a fun reflection of our values." Well those are my values, too. So next time I'm at the supermarket, I'll toss a package of Oreos into my cart. (Here's Buzzfeed on what some other snacks would look like showing their pride.)

The anti-gay bigots may think they're the majority in the United States but the percentages - and time - are not on their side.
Posted by Esther at 1:20 PM