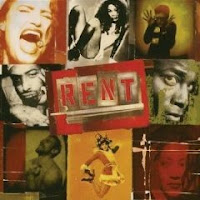 I saw Rent on stage for the first time, with the touring production, several days after last week's announcement that the show would end its 12-year Broadway run on June 1.

Sitting in the audience in Providence on Sunday afternoon, I couldn't help but think of everything I'd read earlier in the week - things I hadn't really thought about when I watched the movie version in 2005.

I knew that Jonathan Larson, who wrote the book, music and lyrics, had died of an aneurysm the night before the show made its public debut, a tragedy that will always give Rent an added measure of poignancy. And I knew there were legions of "Rentheads," drawn to the story, taken from Puccini's opera La Boheme, of young, struggling artists in New York City's East Village. It was a groundbreaking work for its depiction of people suffering from AIDS, for its multiracial cast, for its gay, lesbian, transgendered and bisexual characters, for its vibrant rock 'n' roll score.

But I hadn't really understood what Rent had meant to so many people, and the depth of that feeling, until I read what my fellow bloggers wrote. Rent was an electrifying experience, the first show that their generation grabbed onto, the first time they cried in the theater and the storyline about AIDS in the late 1980s made them think of dozens of friends who had died.

Twelve years later, much has changed. AIDS has thankfully become a manageable disease, something that you can live with, rather than just die from. But reading those firsthand accounts of what it had been like to see Rent a decade earlier somehow made the show seem more immediate to me. And Rent on stage is still a pretty emotional, compelling experience.

First of all, I loved the music, and this touring production has singers with strong, powerful, soaring voices, including South African Idol winner Heinz Winckler as Roger, and former American Idol finalist Anwar Robinson as Tom Collins. With "La Vie Boheme" and "Seasons of Love" I think Rent has one of the best first-act closings/second-act openings that I've ever seen.

And the stories of people coping with AIDS are still powerful. That's what got to me the most. When Roger, an HIV-positive musician, sings "One Song Glory" as his shadow is projected larger than life on the brick wall behind him, it was first of several times that I felt myself getting choked up. Another time was when Tom Collins sings "I'll Cover You" to eulogize the drag queen Angel, played by Kristen Alexzander-Griffith, who has died of AIDS.

I just wish that Rent had spent more time with those very moving stories. I wish we could have gotten to know some of those characters better, where they came from, how they ended up in such dire circumstances. At times I felt like there was just too much going on, too many strands of plot that simply didn't have the same power and poignancy.

The tempestuous relationship between Maureen, a performance artist played by Christine Dwyer, and Joanne, played by Onyie Nwachukwu, simply didn't move me as much as the relationship between Roger and Mimi, the HIV-positive dancer and junkie, played by Jennifer Colby Talton. Although I did like the "Tango: Maureen" number between Joanne and Mark, Maureen's current and former lovers.

And a few things bugged me. I thought the character of Mark, the aspiring filmmaker played by Jed Resnick, was a little obnoxious. In some ways, I liked Mark. He's funny and cute. But he's not sick. He has a family that cares about him. His mother is always calling from Scarsdale. Maybe I'm turning into an old fart, but what gives him the right to think that he can squat in a building without paying rent?

Maybe I have this all wrong, but Mark and Maureen just seemed like middle class kids slumming in a poor neighborhood. It grated on me a little bit. (And there's a character of a bag lady who makes that exact point).

When Tom Collins, the philosophy professor and anarchist, boasts of breaking into an ATM and taking wads of cash, that made me pause. Whose money is he taking? He's taking the money of working people who have deposits in the bank, who'll probably have to pay higher fees to make up for the theft. Ok, maybe I'm thinking a little too hard about this.

One of the things I'd read about Rent before I saw it on stage was that it helped pave the way for rock-oriented shows like Spring Awakening. And when I saw the set: a brick wall, the microphones on stands and musicians on stage, I immediately thought of last year's Tony winner for best musical.

I can see why Rent is compared with Spring Awakening and, from an earlier generation, Hair. They're electrifying, exhilarating shows to watch. They all deal with pressing issues of their times - AIDS, homelessness, the draft and the war in Vietnam, teenage anxiety and sexuality. Perhaps Hair, being the most overtly political of the three, is the most dated.

The music of Rent, and its poignant, human stories of people falling in love and struggling with illness, gives the show a timeless quality. I found it very life-affirming and I'm glad I had a chance to see it on stage. Rent has had its season, and I'm sure, as seasons do, its time will come around again.
Posted by Esther at 9:15 AM