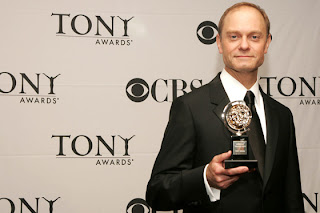 While I'm sad about A Catered Affair closing, as Modern Fabulousity reassures us, Broadway has an infinite number of shiny, beautiful baubles asking for our love. So, I guess it's time to move on and look forward.

When I was in New York last month I had a chance to stop by the stage door of Curtains and say hello to its charming and talented star, David Hyde Pierce. It'd been a year since I'd seen him - when I saw Curtains, in April 2007, so we had some catching up to do. I congratulated him on winning a Tony, thanked him for being so gracious when we first met, told him how sorry I was that Curtains was closing, and said I hoped he'd be back on Broadway again soon.

Well, he is so gracious that even though he probably wanted to take a year off after 16 months of singing and dancing his heart out eight times a week, David Hyde Pierce apparently did not want to disappointment me. Next April, he'll be starring in the Manhattan Theatre Club's revival of the 1934 comedy Accent on Youth at Broadway's Biltmore Theatre.

I'm so excited about the prospect of seeing David Hyde Pierce on stage again. I absolutely love him and I hope this means that the Frasier star has decided to make his new home on stage, in New York. This is officially one of my most anticipated shows of the season - right up there with Billy Elliot. (Yeah I know, I'm excited about a play. What can I say? Sorry, Chris.)

Accent on Youth was written by Samson Raphaelson, a noted playwright and screenwriter. It opened on Broadway on Dec. 25, 1934, at the Plymouth Theatre (now the Schoenfeld) and ran for a total of 229 performances. There have been several movie versions, including one with Bing Crosby, in 1950, called Mr. Music, and But Not for Me, with Clark Gable, in 1959.

There's always the question of how well older comedies stand up, whether the jokes and the characters will seem dated. But the plot sounds promisingly funny. Hyde Pierce's last two Broadway shows, Curtains and Spamalot, have been musicals. His last Broadway play was The Heidi Chronicles, in 1990. In Accent on Youth, he'll portray a playwright who's inspired to write again by his young secretary. His new play makes it to Broadway and then he learns, to his dismay, that the secretary also has been inspiring the leading man.

Meanwhile, Curtains closes on June 29, so there's not much time to see this funny, wonderfully acted, tremendously entertaining show. I know I'd see it again if I could.
Posted by Esther at 12:03 AM

Esther - did you join our DHP forum? You have to come along if you didn't.

Ooh and link to us! Pretty please!