Lend Me A Tenor

Lend Me A Tenor at the Music Box Theatre on Broadway.
Gratuitous Violins rating: *** 1/2 out of ****

One good thing about going to Broadway after the season ends is that you've read the reviews and heard the buzz - or lack of it. And the revival of Lend Me A Tenor had great buzz.

Honestly, I'm not really into farce. Broad physical comedy, disguise, mistaken identity, slamming doors, hiding in the bathroom or the closet - a little goes a long way. It can become repetitive and tiresome. 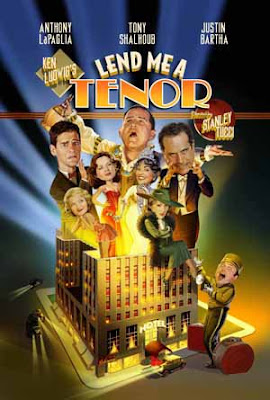 But this terrific ensemble, directed by Stanley Tucci, had me in stitches. What a fast-paced production, with memorable characters and perfect comic timing from an expert cast. I was laughing from the beginning to the inspired curtain call.

Ken Ludwig's play is set in 1934, in a hotel room in Cleveland. An impresario, Saunders, played by Tony Shalhoub, has brought a famous opera singer to star in Otello and he's got a lot riding on the evening's success. (Without giving too much away, let me simply say that complications ensue.)

Justin Bartha, in his Broadway debut, was especially impressive as Max, the mild-mannered, eager assistant assigned to babysit the tenor - who turns out to be quite a handful.

Bartha, who was in the hit movie The Hangover, is so confident and expressive that he seems born to be onstage. I hope this is only the first of many Broadway roles.

Anthony LaPaglia is great as the egotistical tenor, Tito Merelli. And Jan Maxwell, whom I loved as a 1920s Broadway star in The Royal Family, is just as wonderful here playing his tempestuous wife, Maria. Jay Klaitz stands out in a small role as an opera-loving bellhop.

Since I couldn't make it to New York City in the spring, I missed several limited-run plays. In the summertime, a Broadway play is nearly an extinct species. Lend Me A Tenor closes Aug. 15, and I'm so glad I got to see it.
Posted by Esther at 12:10 AM

Bartha was totally great and yah, I hope we see more of him on stage. I think he's a natural.

He only has a small role in The Hangover and I didn't remember him from the National Treasure movies. And he doesn't even list any other stage roles in his Playbill bio. So I was really impressed at how self-assured he seemed, really like he'd been doing it his whole life. (He did go to NYU so I guess he did some theatre in college.) Anyway, he was wonderful.

Bartha caught my attention in a movie that never really caught on called "Failure to Launch." I hope he'll come back to Broadway.

Thanks, SOB! I will definitely check out that movie. And thanks for recommending Lend Me A Tenor, too.