Angels in America, at the Signature Theatre Company
Gratuitous Violins rating: **** out of ****

I've read Tony Kushner's prize-winning Angels in America and I've seen the 2003 HBO miniseries, so I went into last Sunday's marathon performance at New York's Signature Theatre thinking I knew what to expect.

Well, taking in both parts - Millennium Approaches and Perestroika - on the same day in a 160-seat venue was one of the best theatre experiences I've ever had. I saw a familiar work in a new way and I haven't been able to stop thinking about it. What a luminous, transcendent production of a classic American play.

Signature's Angels, which closes on Sunday, is the first New York revival since the original debuted on Broadway in the 1990s. I feel so fortunate that it kept extending, with a new cast, so I could see it on my trip to New York City. If you have a chance to see a production anywhere, just go. 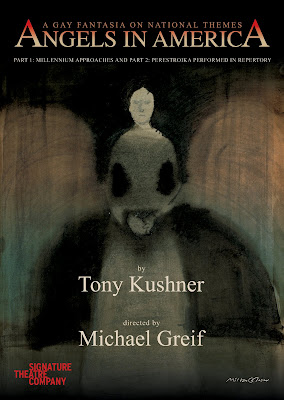 Angels in America is set in New York City in the mid 1980s in the early days of the AIDS epidemic, when it was dismissed as a "gay plague." Michael Urie is Prior Walter, diagnosed with kaposi's sarcoma, a form of cancer associated with AIDS. His lover, Louis Ironson, played by Adam Driver, can't cope with the illness and abandons him.

Kushner could have written a very grim story about that period, but he didn't. It's tremendously life-affirming. He could have written about a man who stands by his lover, as most gay men did when their partners became sick. But his characters are human and flawed. Not everyone, Kushner is saying, can rise to the challenge of a loved-one's illness. (And of course that goes for whether you're gay or straight.)

Some of the dialogue in Angels in America is so lyrical it's like poetry. This is a deeply spiritual, unabashedly political and profoundly moving work. There's also a lot more humor than I remembered - Kushner is a very sharp, witty writer.

Urie, from the TV series Ugly Betty, is amazing. You can see the progression of the disease by the way he moves, how he curls up in bed, the look on his face. There's pain in his voice. He's haunted by strange dreams involving his ancestors and, of course, an angel. He's scared and vulnerable, yet there's this core of strength. And at times, he's very funny.

Driver also impressed me. What Louis does is reprehensible, and he knows it. He's also argumentative to the point of obnoxiousness. Yet with Driver's performance I didn't hate Louis so much as pity him. Kushner also uses Louis as a way to express his outrage at the hypocrisy of gay men who are closeted, powerful and homophobic.

While Angels in America is subtitled "A Gay Fantasia on National Themes" what also struck me is that it's very Jewish, and not solely because there are Jewish characters and Kushner's Jewish. Just like the story of Jacob in the Bible, almost every character is wrestling with something.

Prior is literally wrestling with an angel, as well as with his illness; Louis is guilt-stricken for leaving him; Joe Pitt, a closeted Mormon lawyer, played by Bill Heck, struggles to accept his sexual orientation; his Valium-addicted wife, Harper, played by Keira Keeley, lives in a fantasy world; and his mother, Hannah, played by Lynne McCullough, rushes to New York after he comes out to her in a drunken late-night phone call; the vile, Red-baiting lawyer Roy Cohn, played by Jonathan Hadary, tries to keep the fact that he has AIDS a secret. He's tormented by a vision of Ethel Rosenberg, whom he helped send to the electric chair.

I think the only person who isn't struggling is Billy Porter's Belize, a former drag queen and friend of Prior's who becomes Cohn's nurse. I especially loved his give-and-take with Driver's Ironson about freedom and democracy and race in America. He and Hannah Pitt are the two most compassionate people in the play - toward those you wouldn't expect, which is another way Kushner circumvents our expectations.

The two parts are so well constructed - about seven hours in all but it moves so quickly, with lots of two-person scenes that under Michael Greif's direction flow seamlessly from one to the next.

At the beginning of Angels in America an elderly rabbi delivers the eulogy for Louis' grandmother and he talks about how she came from the old country, how her grandchildren can't make that journey but will have one of their own to make.

In the end, I did feel like I had been on a journey - with a terrific cast who made their characters so utterly compelling. I'll admit I didn't understand everything along the way. The angel, a glorious Sofia Jean Gomez, still mystified me a bit. But her arrival, in a blaze of light and sound, was thrilling. Even though I knew it was coming, my jaw dropped.

Cohn tells his doctor he can't possibly be dying of AIDS because he's not a homosexual. Homosexuals are people without power. (Although he does want the most hard-to-get, experimental treatment for the disease.) He says, "A homosexual is somebody who knows nobody and who nobody knows."

There are so many memorable lines in Angels but that one especially made me think how different things were in the 1980s and how, thankfully, times have changed - for people with AIDS, in the lives of gay and lesbian Americans and in my life.

AIDS has gone from a death sentence to a manageable illness. I now have many friends who are openly gay, people I know well and admire and love dearly. And while there's a ways to go before we achieve full civil rights for all Americans, we have made progress. The world is spinning forward.

After the end of Millennium Approaches a member of the cast made an appeal for Broadway Cares/Equity Fights AIDS, as many productions do at this time of year.

In the lobby, Michael Urie was holding a red plastic bucket for donations and when I saw him I started to cry. He was wearing his pajamas from the final scene - the top sweaty from a fever dream. I could barely speak but I managed to tell him "Michael, you were wonderful. I'm coming back for Part 2 tonight."

I gave him $20 and he gave me a red ribbon, which I will cherish. And I will keep his performance in my heart, always.
Posted by Esther at 10:55 AM

Wow - what an experience this sounds like. I've never seen the play, but adore the script and the HBO miniseries. Thankfully, Chicago's Court Theatre is doing it next season -- and I'm so there.

Oh Bob, I'm so excited that you're going to Angels onstage. I can't wait to discuss it with you! There's nothing like seeing a great play performed live. It was one of those "this is why I go to the theatre" experiences!

What a beautiful review of such a powerful experience. I'd love to do just what you did, get to see both parts in the same day. I've seen the miniseries but would relish the chance to see it live.

Hey Dale, thanks for the kind words. If you can swing a trip to Chicago next spring you could see it at the Court Theatre, like Bob mentioned. If not, be on the lookout for a local production, even a college one. The material is so strong that I would see it anywhere. And I'm definitely going to rewatch the miniseries.