How we talk about race - or avoid talking about it - is at the heart of Clybourne Park, a penetrating work by Bruce Norris that made me squirm in my seat and laugh harder than I have in a long time.

Winner of the 2011 Pulitzer Prize for Drama, Clybourne Park is inspired by Lorraine Hansberry's A Raisin in the Sun, about the black Younger family in 1950s Chicago. At the end of the play, which Trinity Rep staged in 2009, they're moving from their cramped apartment to a house in an all-white neighborhood.

Hansberry never identifies the white family who've sold their home to the Youngers, and that's where Norris fills in the gap. He tells their story and then in Act II, revisits the house 50 years later. What's changed is at times subtle, at times in your face, but always compelling. 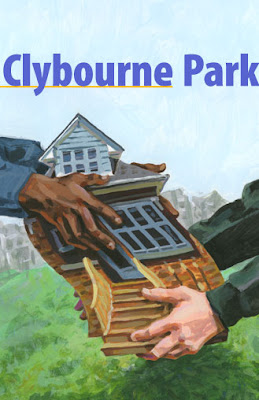 When the play begins Russ and Bev are packing up for their move to the suburbs with help from their black housekeeper, Francine. Anne Scurria's Bev is flighty and talkative. Timothy Crowe's Russ is detached and irritable. There are hints about why they're leaving: a mention of a troubled son and no longer feeling welcome in the neighborhood.

One character appears in both plays and Mauro Hantman reprises his earlier Trinity Rep role as Karl Lindner, the neighborhood association representative. In A Raisin in the Sun, he offers the Youngers money to back out of the move but they refuse. In Clybourne Park, Norris has Lindner trying to persuade Russ to renege on the sale.

Norris resists the temptation to make Karl a stock villain. He acts out of fear - talking ominously about falling property values. And he would never consider himself racist, just realistic: Don't people want to be with their own kind? His very pregnant wife Betsy, played by Rachael Warren, is deaf, the perfect metaphor for a play in which people have difficulty communicating.

To bolster his case, he turns to Francine and her husband Albert, trying to get them to admit that a black family wouldn't be comfortable in Clybourne Park. It's not due to racism, of course, but because, Karl assumes, the local supermarket doesn't carry the food they eat. (He's aided in his spurious arguments by Tommie Dickie's Jim, a minister who isn't acting very Christian.)

As Albert, Joe Wilson Jr. reacts with a wry, seething humor to Karl's browbeating. But Mia Ellis' Francine is more taciturn and wary, not really knowing how to respond, how truthful she can be. The expression on her face, her body language, so clearly showed her discomfort. Listening to her being treated by Karl almost as a child was painful to watch. I just felt for her.

In Act II, we learn what's happened in the intervening half century.

In 2009, Clybourne Park is a black neighborhood that's being gentrified. White professionals are moving in and rehabilitating houses that have fallen into disrepair. The family owned Gelman's market is long gone, first replaced by a Super Value that also closed and now, it almost goes without saying, by a Whole Foods. Even the language is different: we've gone from "colored people" to "people of color."

Hantman and Warren are Lindsey and Steve, a young couple expecting their first child. They've bought the Younger home and are planning to tear it down and build from scratch. Wilson and Ellis are Lena and Kevin, also young professionals with deep roots in the neighborhood. (Lina is related to the Youngers). Scurria is Kathy, a real-estate lawyer and the Lindners' daughter. They left for the suburbs when she was born.

Clearly a lot has changed in 50 years and Norris illuminates that so well through his characters. The contrasts are fascinating: the blacks are empowered, the women are working professionals. It's the white male who feels under the microscope, his every word scrutinized. As nasty as Karl is, Steve seems more insufferable. Ellis, a student in the Brown/Trinity Rep MFA program, is especially impressive in this switch. Her whole demeanor is different from Francine to Lena. She's really transformed.

But as Norris shows, race is still a minefield to be carefully navigated.

Lena is wary of the white newcomers, struggling to explain the history in these houses that they're so quick to tear down. Lindsey, so earnest, explains that she wants to be part of the neighborhood. Steve bristles at his motives being questioned. They both mention all of their black friends. The word "racism" is bandied about. (Softly, of course.)

Finally, everyone lets go of their inhibitions and when that happens, well, I can't remember the last time I've laughed so hard. It was horribly offensive but at the same time, hysterical and riveting. I couldn't help myself. All I could think was, how telling that this is the point at which blacks and whites talk openly with each other, when that veneer of civility is cracked.

I've seen a few plays that try to deal with race in America but none has done it as effectively as Clybourne Park. Norris' characters seemed real to me, not caricatures created to make a political statement. I'm sure in my own sincere, well-meaning white liberal way I've sounded like Lindsey on more than one occasion.

And while their intentions are miles apart, Karl and Lena do raise the same, provocative question about why we live where we live. We may work in diverse offices but how many of us go home to largely segregated communities and social lives?

Norris ends Clybourne Park where it started, with Bev and Russ. For all of our focus on the bigger issues of race and class and changing neighborhoods, he doesn't let us forget that this is a highly personal story.

We're lucky that Trinity Rep's artistic director, Curt Columbus, worked with Norris in Chicago and was able to snag Clybourne Park for its New England premiere. This is a superb production of a terrific new American play. To see it in an intimate theatre of under 300 seats is something you shouldn't miss.
Posted by Esther at 9:45 PM