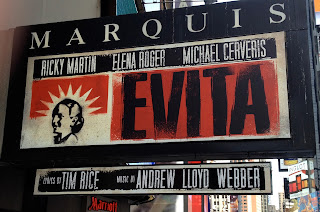 Evita, at Broadway's Marquis Theatre
Gratuitous Violins rating: *** out of ****

Years ago, someone loaned me a VHS copy of Evita - yes, it was that long ago - and I loved it. The story was fascinating, the score was exhilarating and Antonio Banderas was so sexy.

So when a Broadway revival was announced, I was excited. This would be my chance to see Evita onstage and it would be my first Andrew Lloyd Webber musical ever. (I've never seen Phantom of the Opera or Cats or Joseph and the Amazing Technicolor Dreamcoat or Jesus Christ Superstar.)

Of course with anticipation comes the possibility of disappointment, and for a few reasons this didn't totally turn out to be the Evita of my dreams. But hearing the music performed live and watching Eva Peron's story unfold was captivating.

I was really looking forward to Elena Roger, who garnered great reviews in London in the title role. Roger, a petite woman, is a dynamo and she brought out Evita's tenacity and ruthlessness so well. But her voice didn't seem as powerful as I'd hoped and she sounded kind of screechy on the high notes.

I liked Ricky Martin as Che, the everyman narrator. He's charming and good-looking and a great singer and dancer. Still, his character could have used more of an edge. He was less the revolutionary Che Guevara commenting sardonically on Evita's rise, which is what I'd been expecting, and more of an impartial observer.

And her story is such an interesting one.

Born out of wedlock in 1919, Eva Duarte makes her way to the Buenos Aires to become an actress, latches on to a rising Army officer, Juan Peron, played by a powerful Michael Cerveris, and becomes first lady of Argentina, only to (spoiler alert) die of cancer at age 33.

I found myself swept along by the music from Lloyd Webber and Tim Rice. Director Michael Grandage's staging and Rob Ashford's choreography told Evita's story in a way that enthralled me: her hopes and dreams in "Buenos Aires," the cynicism of "The Money Kept Rolling In" and the grief surrounding her death in "Oh What a Circus."

The scenic design by Christopher Oram is somber but it seemed appropriate. Grandage kept things moving briskly. And there were small touches that gave me a sense of Eva's character - the way she casually dismisses a suitor when she meets Peron, for example. The balcony scene, where Roger sings "Don't Cry For Me Argentina," was breathtaking.

I also like the fact that this is a complex story, not merely a fawning portrait. I got a sense of why Evita was so beloved but I didn't feel like I was being manipulated to buy into it. I wasn't sure whether she was an opportunist or someone who really cared about the poor and working class of Argentina. Maybe she was both.

It's hard to explain what makes you fall for a musical's score. But I know that each time I walked by the Marriott Marquis and heard it playing, I got tingly with excitement. After all these years of waiting and despite some flaws, I still love Evita.
Posted by Esther at 10:20 PM