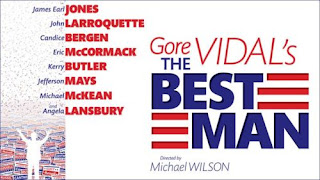 The Best Man, at Broadway's Schoenfeld Theatre
Gratuitous Violins rating: **** out of ****

Usually I know way too much about a show going in, so I'm glad I restrained myself with The Best Man before seeing the Broadway revival. I was amazed at how Gore Vidal's 1960 play about a presidential campaign feels like it could have been written in 2012.

Set on the eve of their party's convention, when the nominee is still in doubt, The Best Man pits John Larroquette's Secretary of State William Russell, a rumpled, cerebral New Englander, against Eric McCormack's Sen. Joseph Cantwell, a handsome, charismatic Southerner.

As a history and politics junkie, I loved every minute of all three acts. What makes The Best Man so fascinating for me is that the play, which premiered on Broadway in March 1960, foreshadows changes that would take place in American politics in the coming months and years. It's uncanny.

Granted, political conventions today are scripted down to the tiniest detail and the nominee is no longer in doubt. But Vidal's writing is witty and his characters are sharply drawn. Fifty-two years later, the candidates are familiar and the issues seem so timely.

The plot involves allegations about each of the two men that could derail their campaigns. No spoilers here but they have parallels in more recent presidential bids. The only difference is that today, there's no way they'd stay private. (Another difference that jumped out at me - neither candidate is wearing an American flag pin on his lapel.)

If Cantwell is the future of presidential campaigns - slick and telegenic - then former President Artie Hockstader, "the last of the hicks" he calls himself, represents the past. James Earl Jones was riveting as the blunt and no-nonsense Hockstader. This was my first time seeing him onstage and I was awestruck by his unmistakable voice and commanding presence.

In fact, the entire cast of The Best Man is terrific - Candice Bergen as Russell's wary estranged wife; a delightful Angela Lansbury as the shrewd head of the party's "women's division"; Michael McKean as Russell's trusted campaign manager. (I saw the play before McKean's injury and I wish him a speedy recovery.) Jefferson Mays is great as a meek and intimidated figure who has some dirt on one of the candidates. And Kerry Butler plays Cantwell's Southern belle wife to the hilt.

The play takes place mostly in the candidates' hotel rooms in Philadelphia but Derek McLane's set design extends to the audience - the Schoenfeld Theatre is decorated with lots of red, white and blue bunting and the signs with state names on them that you see at conventions.

But you don't have to think too hard to come up with contemporary politicians who fit those descriptions. Cantwell, with his populism and emphasis on his working-class roots, reminded me of John Edwards. (He has Edwards' hair but not his particular moral failing.) And Russell's intellectual demeanor reminded me of John Kerry.

My favorite example of how The Best Man resonates occurred when the play ended.

After the curtain call, McCormack came back onstage to make a pitch for donations to Broadway Cares/Equity Fights AIDS. Someone shouted from the mezzanine "I'd vote for you!" McCormack, a look of astonishment on his face, said, "Really?"
Posted by Esther at 10:32 AM

Saw this a couple of weeks ago, and, wow!
All those talented actors, and James Earl Jones acted rings around them. (Candace Bergen was wonderful as well - certainly made the best of a smaller role.)

What got me about the performance *I* saw was the audience reaction to the "politics should be better" ethos portrayed by Larroquette's character. I thought Jones's points (when the guy has a knife to your throat, I want a man who will fight back) were much better, even though they didn't get the audience approval.

Anyway, a very well done, very thought-provoking work, and a real treat of a performance.

Thanks for the comment! The point raised by Jones' character was really interesting. It does make you think about the qualities you'd want in a president!

I was pretty amazed too at how the play seemed so current although I must say, the night I saw it, Mr. Jones stammered through some of his lines which made me cringe a little. Still enjoyed seeing such a stellar, perhaps once in a lifetime cast though!

The same thing happened when I saw "Other Desert Cities" when the 'son' forgot his lines. I probably felt worse than he did!

Can't wait to see what happens at the Tonys.

I did not notice any stammering. But it could be that I just don't pick up on these things. I've only been at one show where it was obvious someone forgot a line - Cheyenne Jackson at Finian's Rainbow. And his reaction was funny so we all laughed.