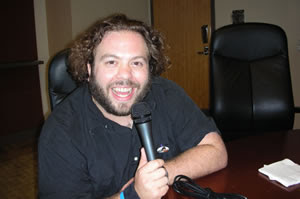 I was catching up on Filmspotting, one of my favorite podcasts, while I was exercising the other day and my ears perked up when the talk turned to Dan Fogler, a Tony winner for his performance in The 25th Annual Putnam County Spelling Bee.

Fogler seems to be concentrating on his movie career nowadays, and I'll admit I haven't seen any of the movies he's been in. I just haven't been all that interested in Balls of Fury or Good Luck Chuck or School for Scoundrels.

But his biggest role is coming up and it's one that does interest me. He'll portray the master of suspense, Alfred Hitchcock, in a murder mystery called Number 13. Now, I saw The 25th Annual Putnam County Spelling Bee on tour, so I missed Fogler's performance as William Barfee (that's Bar-fay). Although I caught a little bit of it on the 2005 Tony awards, and he was pretty funny.

The cast of Number 13 looks great. In addition to Fogler, it features Ewan McGregor, Emily Mortimer and Ben Kingsley. I've never heard of the director, Chase Palmer, who also wrote the screenplay. But in 2005, Filmmaker Magazine listed him as number 23 in its list of 25 new faces of independent film.

Unfortunately, there's very little current information about the movie. It's listed on imdb as being "in production" this year. A 2006 post from Cinematical says the story takes place during the filming of a movie and finds the director "caught up in a Hitchcockian dilemma when he ends up in a love triangle with two crew members while making the film. When the lead actor turns up dead, the editor suspects the director and tries to uncover the truth."

The most recent mention I could find is a story from February that appeared in The Hollywood Reporter, which said that the movie would begin filming sometime this year in Cologne, Germany. The article says that the drama "focuses on Alfred Hitchcock's first film, the 1922 thriller Number 13, which was never finished and has been the source of much speculation by Hitchcock fans and film historians."

In an interview with MTV last year, Fogler said "[The movie is] cool if you're a Hitchcock fan. Just like Shakespeare in Love, you see how he comes up with certain ideas [for future films] from events that happened during the course of the movie."
Posted by Esther at 8:31 PM

I love all things Hitchcock. I may have to see this.

Thanks for the comment Jeff! You must have loved The 39 Steps on Broadway. Did you see it yet?

Well this project has been percolating for quite a while. I found stories about it going back two years. I really hope it gets made, because it does sound interesting. I picture it as being very 1920s and film noirish.

Fogler reminds me of a young Curtis Armstrong (Risky Business, Revenge of the Nerds, Moonlighting)...

Hmmm, I'm not familiar with Curtis Armstrong, although I did see Risky Business years ago. I'll have to do some research!

Once you see Curtis you'll say, "Oh, I know that guy!"

He's the one who said, "Joel, you wanna know something? Every now and then say, "What the fuck." "What the fuck" gives you freedom. Freedom brings opportunity. Opportunity makes your future."