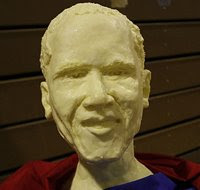 The Democratic National Convention winds down tonight, with Barack Obama giving his acceptance speech at Denver's Invesco Field - on the 45th anniversary of Martin Luther King's "I Have a Dream" speech, no less.

While Obama has a long list of celebrities who've endorsed his bid to become president, including musicians, actors, athletes and talk-show hosts, I want to give a shoutout to my favorites, my friend Doug Lyon's mom and dad, Iowa dairy farmers Joe and Norma "Duffy" Lyon. (No offense, Oprah!)

I've never met Doug's parents, or even been to the Hawkeye State, but his mom is famous for the butter sculptures she created each year for decades at the Iowa State Fair. (She sculpted the bust of Obama pictured above). Last year, Lyon taped a radio ad endorsing Obama, which you can listen to here. There's also a video the Obama campaign taped at the Lyon family's farm.

Some questioned how well Obama would fare in Iowa, a state with a black population of less than 3 percent. But people met him, listened to him talk about his background, his values and his stand on the issues, and enough of them liked what they heard to give him a victory in the state's Democratic caucus in January.

It's all too easy to have preconceived notions about people based on where they live, their occupation, their age, their race or ethnic background, their faith or who they love. At times, I've probably been guilty of some of that, too. We focus a lot of attention on the things that divide us as Americans, but there's much, much more that unites us.

Sure, things could have gone the other way, Iowa Democrats could have disagreed with his stand on the issues, and that would have been fine. That's what democracy is about, after all. But the important thing is, they judged Barack Obama on the content of his character. No matter what happens in November, I hope that's what we all do.
Posted by Esther at 9:06 AM