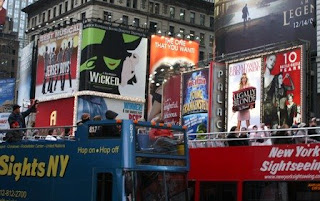 I'll admit it, I love being a tourist and doing all of those touristy things. So this really struck a chord with me. I mean, is there anything more fun to read about than a first trip to New York City - and a first visit to a Broadway show? I don't think so, and I know you agree.

In a very sweet and funny story that reminded me a lot of my own New York adventures, Los Angeles Times reporter Christopher Reynolds writes about a group of 14 drama students from Verdugo Hills High School who were making their first trip to Manhattan.

They did the usual tourist things during their five days in New York: visited museums and landmarks, rode the subway and ate pizza, hot dogs and pretzels, slept three and four to a hotel room. (Well, the last thing is a little unusual).

But obviously, Broadway was a big draw for these kids, who had just put on their own production of Footloose. There were lots of theater-related activities arranged by their teachers - a stop at The Drama Bookshop, a tour of The Public Theater, an hourlong sitdown with Young Frankenstein's monster, Shuler Hensley, and of course, a few shows.

Their inaugural Broadway experience was a matinee of Young Frankenstein. "They exit the theater all grins, " Reynolds writes. "Megan Mullally's singing, the monster's soft-shoe dancing, the 34-year-old movie jokes by Mel Brooks and Gene Wilder, the deafening effects - the whole daffy, glossy package works for them."

Ok, granted, I was not as enthralled with Young Frankenstein, but I had to smile when I read that. Just being on Broadway, in the sweaty sea of humanity that is Times Square, is darned exciting. By the time you get inside the theatre, settle into your seat and the orchestra begins the first strains of the overture, well, it's pretty much sensory overload. A couple of hours later, and you're still on that adrenaline rush.

Then, changing gears completely for their second show, they take in Spring Awakening. Seeing a group of teenagers go through the anxiety of adolescence, with tragic results, is an intense, riveting experience. Two boys are weeping on the sidewalk afterward and have to be comforted by their classmates. (I know how they felt. When I saw it, I was crying, too, by the end.) One girl says, "That was the most amazing thing I've ever seen in my life."

Their third show is Xanadu, and of course, by now they're more discerning theatergoers, no longer Broadway babies. As Reynolds says, "they seem more demanding now than those newbies who stumbled off the plane three days ago." While they enjoy the Southern California references, overall, the musical gets mixed reviews from the group. One boy dismisses it outright as "just shtick." A girl rates it 7.86 out of 10.

The trip cost each student $1,600, which they raised through car washes, bake sales, rummage sales, some school district funding and the first bank of mom and dad. But apparently, it was worth every penny. Here's one 16-year-old girl's description at the end of their first day: "Something washed over me, and I connected to the spirit of the city. I sat in Virgil's BBQ a different person."
Posted by Esther at 9:11 AM

ah, i think this says it all:

"Something washed over me, and I connected to the spirit of the city," writes 16-year-old Sara Saavedra of the first night. "I sat in Virgil's BBQ a different person."

Virgil's: gross. When I'm Mayor of Broadway, every tourist craptrap restaurant will be shut down by my decree the day of my inauguration. Tourists will be forced to discover the real New York.

As for sleeping 3-4 to a room, that's fairly typical for high school trips We did it over 20 years ago so I see it's still going on - have to be economical especially in NYC hotels.

Still this is a cool story. I'm jealous. We only got to go to Austin and the only reason for that was because we earned the opportunity to compete at a state level.

SarahB, did you compete in state level One-Act competition?!? If so, I did too!!! Craaazy...

And also, NYC BBQ? Yeah, SarahB totally hit the spot. But that may have something to do with our Texas roots... plenty of BBQ down here.

Esther, this post is super sweet. Can't wait to tell you about my trip. "Damn... I gotta get on that." (In the Heights)

Yeah, I know, Kari! That is a great quote. There's something so innocent and heartfelt about it. And I can totally relate. When I went to New York in 2007 to see "A Moon for the Misbegotten," I had a turkey sandwich at the Edison diner. How can you not love a city where the default bread is rye! Even though I lived in Israel for a year, I think Manhattan is my true spiritual home. ;-)

Thanks Sarah! I will definitely stay away from that one. You're right, food is a large part of discovering New York City and it's a shame to not partake.

I think a lot of people are just cautious and don't know where to go, so they search for something that looks familiar or chain-like. But all they have to do is walk a couple streets away from Times Square. Also, it may be more difficult if you're with a large group, I don't know.

Anyway, their trip did sound like a blast. I love reading travel stories. It's one of my favorite nonfiction genres.

Thanks Joseph!
I can't wait to hear about your trip. Like I just said, I love reading about other people's travel adventures, especially if it's about a place I've also been.