Jumping on the Wall-E bandwagon

I know I'm a bit late with this, but I finally saw Wall-E, the latest movie from Pixar animation studios and writer/director Andrew Stanton, who also directed Finding Nemo. 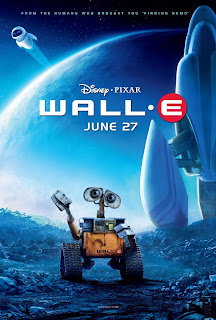 I was going to wait until this one came out on DVD. But Vance at Tapeworthy gave Wall-E high marks in his summer movie roundup and said I really should see it on the big screen. He was right. It's a great movie with a very appealing main character and a graphic warning about the consequences of runaway consumption. In terms of illustrating the damage that we're doing to our environment, I think it hit me harder than An Inconvenient Truth. So thanks, Vance!

I'd read that the first 40 minutes or so contain almost no dialogue, and I was afraid I'd be a bit bored, but it was riveting. As the movie opens, we see an abandoned planet Earth filled with nothing but towering skyscrapers of garbage. It's visually stunning and more than a little disturbing. I mean, I'm sure my old newspapers and plastic water bottles are in there somewhere from the days before recycling.

Wall-E (For Waste Allocation Load Lifter - Earth Class,) is a robot, a tiny trash compactor who's spent the past 700 years cleaning up the huge piles of man-made waste that have overtaken the Earth and made it uninhabitable. Wall-E is a little beaten up, but he's a plucky and resourceful fellow, scavenging spare parts and recharging himself from the sun's rays.

Let me just say that Wall-E, who's voiced by Ben Burtt, is adorable. His performance is one of the best I've seen all year. In an almost totally nonverbal way, the creative team at Pixar has created a very likable, sympathetic character. And it's really fun to watch all of his human-like mannerisms: the way he cocks his head or interlocks his little mechanical hands.

You can tell that Wall-E leads a kind of a lonely existence. Except for his cockroach pal, he seems to be alone on the planet. (Hey, what's a Disney movie without a sidekick, right?) All of the other robots must have have broken down ages ago. All of the humans have been launched into space on a giant craft that resembles a cruise ship, where they grow corpulent and await word that Earth can once again sustain life.

One of Wall-E's greatest pleasures comes from watching a videotape of the 1969 film Hello Dolly!, especially the songs "Put On Your Sunday Clothes" and "It Only Takes a Moment." It's clear that Wall-E yearns for his own life to be filled with what he sees in movie - happiness, love, a little music and someone or something with whom he can hold hands.

Wall-E gets his wish when a robot named Eve, for Extraterrestrial Vegetation Evaluator, is sent to to Earth from the spacecraft to search for signs of life. Wall-E sees Eve (voiced by Elissa Knight) and is immediately smitten.

As a machine, Eve is everything Wall-E isn't - sleek and polished as shiny new iPod, with glowing baby-blue eyes. Watching him fall in love is really very cute. What he wants to do more than anything is hold her hand, just like he's seen people do in Hello, Dolly! You're really rooting for him.

The second part of the movie, when Wall-E and Eve are on the spaceship and have to do battle with evil robots and foil nefarious plans and make daring escapes, didn't seem quite as magical to me. I still enjoyed it, but the movie just became more of a generic action/adventure story from that point.

But there's a lot of humor, especially from the character of the ship's captain, voiced by Jeff Garlin, and a live-action Fred Willard as the CEO of the corporation that's trying to clean up Earth. Plus, there are some nice shoutouts to 2001: A Space Odyssey.

In one sense, Wall-E is kind of a dystopian movie. It presents a pretty grim picture of the future of our planet. So Wall-E and his infatuation with Hello Dolly! provide a nice counterpoint. I liked the way the movie focuses, in part, on the power of musical theatre to captivate us, to lift our spirits, to illuminate the best parts of the human condition.
Posted by Esther at 3:46 PM

I loved this movie. My husband and kids watched it over the fourth of July weekend but I didn't get to see it until a couple weeks later. The duelism in it is really magical. To me, it was a kinda creepy post-apocalyptic vision with a lovely love story mixed in, but to the kids, it was just fun. I don't know that i've ever seen movie dualism done so well. Jason told me, when he'd first seen it, that the movie would be creepy to anyone who was over the age of 14 or 15, and thus able to understand what it was really about.

Seriously, wasn't the first half SPECTACULARLY animated? And yet so chilling because it was so spectacularly animated.

And is it weird that WALL*E, a computer animated ROBOT possibly gave one of the most moving performances this year? If not any year?

Glad you saw it on the big screen in all its full colour glory and glad you enjoyed it!

What's also so spectacular is how a new audience is introduced to a classic Broadway show (even if via a mediocre film adaptation). But what really hit me especially in the movie theatre, was the strength of Herman's lyric for "It Only Takes a Moment," a highly underrated ballad in my opinion.

And I just adored Wall-E. Especially each time he used his binocular-like eyes to show emotion. Haha. I'd love one for a pet.

My favorite moment was the "spork" classification dilemma.

I was prepared for it to be yet another over-hyped flick--but found it totally enchanting.

Hey Amanda,
It definitely was kind of creepy to see the giant mounds of garbage reaching to the sky, but I'm sure most kids don't realize the significance of that, or what it means when the planet becomes uninhabitable. I once took a bus tour of Love Canal as part of a conference I attended. It's a community near Buffalo that was basically built on top of toxic waste. As we drove through, we saw that the streets and houses and buildings and school were still there, but the neighborhood was abandoned. Extremely eerie.

Thanks for spurring me on Vance! The first-half animation was pretty amazing. I mean, I really was afraid I'd be a little bored, but there was just so much to see. And yeah, Wall-E does give an amazing, life-like performance.

Hey, TAAL,
I know, I loved the eyes. What a cutie! It was great the way they showed Wall-E's emotions. The animators made him so sympathetic, like someone you could really identify with. I might have to get it on DVD, because I'd definitely like to see that first 40 minutes or so again. And I agree, it's always great when you can introduce a new audience to a Broadway show!

I forgot about the spork! It was hilarious. I know what you mean, sometimes you hear everyone raving about something and it's almost inevitable that you'll be disappointed. But enchanting is definitely a great word to describe this movie.

Esther, I'm writing a HUGE post on Wall-E! It'll probably be up by the tonight or tomorrow morning. I saw it months ago and I claim it to be the best movie I've seen this century!!! The post will explain more. But thanks for your consistent writing and lovely thoughts. Keep it up!

Awww, thanks Joseph! I loved reading about your adventure in New York. And wow, that's high praise for Wall-E. I'll be looking forward to your post.