I picked up the new Broadway cast recording of Hair yesterday at Borders. It was on sale for $14.99 but I got it for free by using three of my Borders Rewards Visa coupons! (Okay, almost free. I had to pay $1.04.) 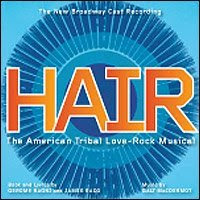 When I got home, I tore off the shrink wrap and started flipping through the booklet. Lots of pictures. Introductory essays from Diane Paulus, director of the Broadway revival; and Oskar Eustis, artistic director of the Public Theater. But sadly, no song lyrics.

Personally, I find the absence of lyrics a disturbing trend. I first noticed it when I bought the cast recording of Curtains, produced by Manhattan Records and EMI, and it was very disappointing.

Yeah I know, most people get their music from iTunes and just download the booklet and cover art. I did go to a Web site and print the Curtains lyrics but it wasn't the same. They were too big and bulky to fit in the CD case.

A lot of people listen to their music on the go - in the car or on the subway or exercising or whatever. And obviously, reading while driving is not a good idea. But occasionally, I do listen to a CD at home, on my CD player, and I like to follow along. I even like to prop the booklet up on the treadmill while I'm at the gym.

I know there's a cost factor and cast recordings are a niche market to begin with. If you've got a single CD, there's only so much you can pack into the booklet. And maybe some people would rather have the photos and essays. Don't get me wrong, I like them.

But after producing a terrific 2-CD cast recording of In the Heights, with lyrics, I just wish that Sh-K-Boom/Ghostlight could have accommodated them on the Hair CD, too.
Posted by Esther at 2:30 PM

Thanks, Alicia! I will print that out and keep it with me. ;-)

Get iTunes plugin,Soundcrank is the best site to get lyrics and album artwork, find out about new music releases, and get music recommendations. Get iTunes software downloads http://www.soundcrank.com/

I recently came accross your blog and have been reading along. I thought I would leave my first comment. I dont know what to say except that I have enjoyed reading. Nice blog. I will keep visiting this blog very often.