Doctorow on Ragtime, the musical

The Broadway revival of Ragtime will be my first novel to movie to musical adaptation!

I loved the 1975 novel but I don't remember too much about the 1981 movie by Milos Forman, other than it was James Cagney's last film role. 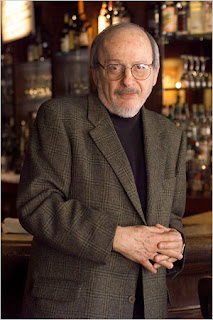 I vaguely recall that E.L. Doctorow didn't like the movie of his novel so I was curious how he felt about the musical, which features a book by Terrence McNally and a score by Stephen Flaherty and Lynn Ahrens.

Apparently, he likes it. I found an old interview from the San Francisco Chronicle in which he said that he was "very fond of the musical." (And the reporter confirms my suspicion that Doctorow is not a fan of the movie.)

The musical, he believes, "shows honor and devotion to the book. I was not a collaborator, but I was more than an observer. I fed them notes and think I was fairly useful to them. They were responsive to me.''

Having been promised approval rights over the creative team, been vigilant during the rehearsal process and made a point of seeing new musicals that have since opened, he says he's convinced "it verges on being an American opera. The piece really shines. Most of what you see (in other musicals) is so thin. Or hokey. Or overwrought.''

Now I know! I'm thinking it would be interesting to read the novel again, or at least watch the movie, but maybe I'll wait until after I see the musical, which begins previews Oct. 23 at the Neil Simon Theatre.
Posted by Esther at 12:30 PM