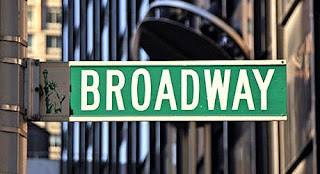 Maybe it's the Obama Effect or just a coincidence but there are five shows opening on Broadway this fall that deal with the subject of race in America - musicals Ragtime, Memphis and Finian's Rainbow and plays Superior Donuts and Race.

Three of them - a revival of Ragtime and two new plays, Tracy Letts' Superior Donuts and David Mamet's Race - are among the shows I'm most looking forward to seeing as the 2009-2010 Broadway season gets under way.

Why those three? Well, I've always been interested in 20th century American history, not so much from the perspective of momentous events but from a social and cultural angle - where we come from and how we get along.

Ragtime, based on E.L. Doctorow's novel, with a score by Lynn Ahrens and Stephen Flaherty, focuses on three families - African-American, Jewish immigrant and WASP - at the turn of the century. I loved the book and from listening to the music, I think it does a wonderful job of telling those intertwined stories.

Superior Donuts, fresh from the Steppenwolf Theatre Company, is a contemporary look at a diverse, changing Chicago neighborhood. After seeing so many terrific Chicago actors in August: Osage County, I'm eager for more, including Jon Michael Hill, who's making his Broadway debut. He's won raves for his performance as a teenager who works in a doughnut shop owned by Michael McKean. (From Spinal Tap! Laverne & Shirley!)

And Race - well, no doubt Mamet will have something interesting and incendiary to say. Plus, of all the big-name movie and tv actors who'll be treading the boards this fall, it has the one I'm most excited about - Richard Thomas. Yes, I realize James Spader is in it, and David Alan Grier and Kerry Washington. But c'mon, The Waltons! I grew up pre-VCR, pre-cable. Network tv was all I had. 'Nuff said.

I'm also pretty pumped about seeing A Steady Rain. Yes, I want to see how Hugh Jackman and Daniel Craig will transform themselves into Chicago cops in Keith Huff's two-hander play. But no doubt about it, I'm also looking forward to staring dreamily at Hugh Jackman for 90 uninterrupted minutes. (Although the Playbill, which features their melded faces, is creepy beyond words.)

And I simply cannot miss the revivals of two Neil Simon plays, Brighton Beach Memoirs and Broadway Bound. I'm really looking foward to seeing what Chicagoan David Cromer, who directed the amazing Our Town, will do with them.

The plays are thinly veiled accounts of Simon's youth growing up in Brooklyn in the 1930s and '40s. Which means, I know, creaky, self-deprecating Jewish humor. What can I say? Lines like this truly make me laugh:

"I hate my name - Eugene Morris Jerome. How am I ever gonna to play for the Yankees with a name like that? All the best Yankees are Italian. My mother makes spaghetti with ketchup. What chance to I have?"

"And when they saw the Statue of Liberty they started to cry. The women wailing and the men shaking and everyone praying. And you want to know why, because they took one look at that statue and said, 'That's not a Jewish woman, we're gonna have problems again.' ''

I've all-but given up on Broadway, but I won't say that I'm not curious to see a world-premiere like "Race." And though he's got enough cred now to open on Broadway, I will be making an exception to catch "Superior Donuts," just because I want to support Letts's writing and his growth.

Thanks for the comment, Aaron! Personally, I don't get to Broadway often enough to give up on it. ;-)

There's a lot of really great theatre going on outside Times Square and I wish I lived in New York so I could see more of it.

You know, as much as I want to see Race, I am kind of wary of Mamet. I think he takes topics on which he wants to make a statement, like art vs. commerce in Speed-the-Plow, politics in November (which I didn't see) and now race relations, and turns them into plays. But I wasn't a huge fan of Speed-the-Plow. So we'll see.

On the other hand, I agree about supporting playwrights you enjoy, like Tracy Letts. I know some people will be disappointed that it's not August: Osage County but for me, as much as I loved A:OC, I'm psyched that he's doing something completely different.