I admire anyone who works with young children because it's such a demanding job. The closest I've come was a year I spent living in Israel, where I worked with English teachers in a Tel Aviv elementary school. Sometimes I'd have to handle a dozen or so kids on my own, and that was more than enough. 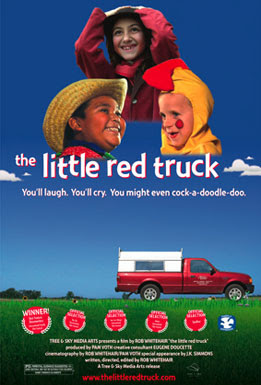 So I have to hand it to the Missoula Children's Theatre, the subject of a very sweet documentary from 2008 by Rob Whitehair called The Little Red Truck.

For 35 years, this Montana-based company has traveled across the United States and Canada, to communities large and small - some of which don't have a school drama program. Over the course of a week, they cast, rehearse and mount a one-hour musical using about 60 local kids.

The movie combines footage shot in six places, including Nunavut in the Canadian Arctic, to take us through a week of activity, from auditions (sadly, not every kid makes the cut) to rehearsals and finally, the big event.

The tour directors who take the show from city to city don't have an easy task. It's tough to get kids to trust someone they've never met before, who are afraid of being made to "look stupid." But like good teachers, they're patient and energetic and they work hard to build a rapport with the kids.

And it is poignant to hear some of the stories - a 13-year-old caught up in a gang, kids who have to walk to and from rehearsals because their parents can't take them, or whose parents can't make it to their performance, a girl in the throes of stage fright.

Jim Caron, the theater company's cofounder and CEO, says in many of the places that the Missoula Children's Theatre visits it's the school play and community festival rolled into one. But he hopes it's more than that.

Like the documentary OT: Our Town that I watched last month, The Little Red Truck is a testament to the power of theatre. "Let's put on a show" may be a corny, overused phrase but you know, there's something to be said for it.
Posted by Esther at 8:30 AM