When I'm not at the theatre, I squeeze in as much sightseeing as is humanly possible during my trips to New York City. The heat and humidity didn't make it easy this time but I persevered.

First up was a return visit to the American Museum of Natural History for Race to the End of the Earth. What's better on a sweltering day than a little polar exploration?

The exhibit tells the story of the competition between British Navy Capt. Robert Scott and Norwegian explorer Roald Amundsen in 1910 to be the first to reach the South Pole. 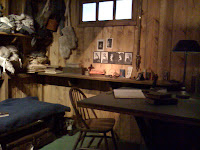 It was a contest of unimaginable hardship, told through artifacts from the two expeditions, photographs and a time line that relates what they were up against every step of the way.

At right is an example of the wooden huts the British built at their camp. Apparently they were especially unprepared for how quickly the temperature plunged from cold to unbearably cold.

Just to give you an idea, last night's temperature at the Amundsen-Scott South Pole Station in Antarctica was -56 degrees Fahrenheit, with a wind chill that made it feel like -90. That's MINUS 90.

Neither expedition had the high-tech gear that polar researchers use today to make their work safer, no Gore-Tex to keep them warm. (They wore parkas made from reindeer fur and you can touch a sample - it's smooth and silky.)

The exhibit tells the story very well. It explains not just what happened but why. The decisions Scott and Amundsen made about what to bring, when to start out, their backgrounds and personalities, all figured in the outcome.

Here's a segment NPR did about Race to the End of the Earth with the museum's Ross MacPhee and polar explorer John Huston. The exhibit runs through Jan. 2.

I made my first trip to the Jewish Museum for the now-closed Curious George Saves the Day.

This was another interesting story that was unknown to me: how the husband and wife who wrote and illustrated the Curious George books, Margret and H.A. Rey, fled Europe during World War II. 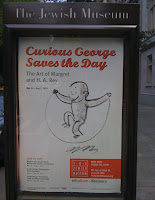 It was so poignant to read the handwritten letter that Hans Rey sent to his British publisher, telling him they made an "adventurous flight from Paris" by bicycle in June 1940, two days before the Nazis marched in.

After traveling by bicycle and train, the Reys reached Lisbon. They sailed from there to South America and finally to the United States, reaching New York City in October 1940. The first Curious George book was published a year later.

The mischievous monkey came from sketches of animals that Hans Rey made when he lived in Brazil in the 1920s and '30s and traveled along the Amazon selling goods. (Apparently, he also complained about the tropical heat, hence the Man with the Yellow Hat.)

The theme of narrowly escaping peril that figures into Curious George's adventures parallels the Reys' escape from the Nazis. (It's amazing how deep children's books are once you learn about the background.)

Curious George Saves the Day moves to the Contemporary Jewish Museum in San Francisco from Nov. 14 - March 13, 2011. Here's more about the exhibit from the WBUR radio program On Point. 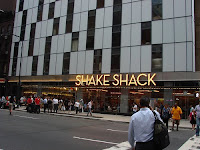 I don't eat much red meat but I'd been hearing so much about the Shake Shack, which opened in midtown Manhattan, that I really wanted to try it.

Well, the line stretched out the door and down the street. I don't think I've ever stood in a longer line to get a hamburger. All told, it took about 30 minutes.

The verdict: delicious! I was afraid it would be dry, tasteless fast-food fare. Just the opposite.

My Shack Burger with lettuce and tomato was juicy, flavorful, not overly greasy. And the mayonnaise-based Shack Sauce provided the perfect condiment. Accompanied by a refreshing Arnold Palmer, it was a nice light pre-theatre dinner.

Finally, I walked by the fire station at 8th Avenue and 48th Street that houses Engine Co. 54, Ladder 4.

The "Pride of Midtown," which protects Broadway, proudly proclaims that it's "never missed a performance." Judging from the mural, they really get into the role, too.

If you pass by, stop for a moment at the memorial to the 15 men from the station who lost their lives responding to the Sept. 11 attacks. Firefighters enter places where everyone else is trying to flee. Heroes all.
Posted by Esther at 12:20 AM

I'm glad you finally made it to Shake Shack -- I don't lie about my burgers! I don't think the lines get quite that long at the UWS location, but I try to plan accordingly.

Thanks! Wish I could say the new look was a product of my superior design and html skills but really it was just a new Blogger template that I liked.

I walked by the midtown Shake Shack a couple of other times and there was always a line out the door but maybe it'll get better once summer's over.

Mmm. I don't know what a shake shack is, but I'm sure loving the idea of it, by name alone, right now.

It would be the perfect complement to your instadinner, I think.