Washington, D.C., has been one of my favorite cities ever since my first visit, on a high school trip with Project Close Up. 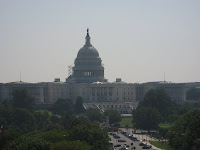 Last weekend was my first time back in about six years. I saw some dear friends, attended a bar mitzvah and on Sunday, I had a chance to do some sightseeing.

My first stop was the Newseum, which I'd seen years ago in its old location, in Virginia.

The new six-story building on Pennsylvania Avenue is impressive and there's a great view from the rooftop terrace. Even from a distance and through the summer haze, the sight of the U.S. Capitol never fails to thrill me. 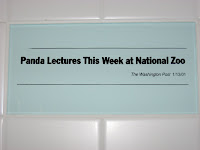 I liked the displays that focused on the history of newsgathering, Pulitzer Prize-winning photographs, press freedom and challenges to the First Amendment.

You get a good overview of how covering the news has changed over the centuries, including the advent of online journalism, blogging and Twitter.

The headline flubs on the walls in the bathroom, taken from the Columbia Journalism Review, were funny - as long as you weren't the one who wrote them.

But I have to admit, the journalism theme park aspects of the museum left me feeling a bit cold.

I decided not to "shake rattle and roll through I-Witness! a 4-D film experience." I did walk through the "G-Men and Journalists: Top News Stories of the FBI's First Century" exhibit and some of it was a little lurid - the Unabomber's cabin and the electric chair that killed the kidnapper of the Lindbergh baby.

Also, I was a little put off by the video of Jon Stewart and Stephen Colbert. They're not journalists, they're comedians. Still, I realize it's 2010. You have to be fun and interactive while you're trying to inform and enlighten. And they do offer their own unique spin on the news.

The Newseum is worth a visit - use your AAA card for a discount on the admission. And it got me thinking - aren't we overdue for a Broadway revival of The Front Page? 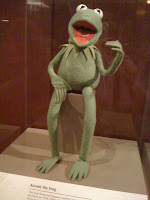 My next stop, after a long, hot walk across the Mall, was the Smithsonian's National Museum of American History - hands down my favorite museum in the world.

I've always been a huge American history buff and I love the way the museum tells the story of the United States - not simply through the action of great men and women but through the lives of ordinary Americans and through popular culture.

There are examples of great courage - the Woolworth's lunch counter in Greensboro, N.C., where four black students sat down in February 1960 and refused to leave until they were served. And there are items from our collective cultural memory - Kermit the Frog from The Muppet Show and Dorothy's ruby slippers from The Wizard of Oz. 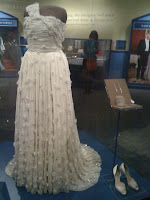 While I've been to the museum numerous times, I have never felt as moved as I did on this visit, when I saw Michelle Obama's inaugural gown.

At the bar mitzvah on Saturday, the rabbi reminded us that it was the 47th anniversary of the March on Washington and he urged us to recall Martin Luther King's "I Have A Dream" speech.

Admiring the gown a day later, in a crowd with many African-American museumgoers including elderly men and women, families with young children, was incredibly poignant.

It was a tangible example of how far we've come in realizing Dr. King's dream and in fulfilling the promise of this country - the promise of equality.

Here is the first lady presenting the gown to the Smithsonian in March:

Since it was on the way to the Metro, I stopped at the National Portrait Gallery before heading back to my hotel.

There's an interesting exhibit through Jan. 2 of Norman Rockwell paintings and drawings from the collection of directors Steven Spielberg and George Lucas. I learned how Rockwell had influenced their work as filmmakers, which I hadn't realized.

I love the Portrait Gallery, with its collection of paintings and photographs of famous Americans from all walks of life. But after seven hours of walking around, I was getting a little tired. (In my mind, you haven't done enough sightseeing until you're ready to collapse.)

Hopefully I can return on my next visit - which won't take six years - and I can include a little theatergoing, too.
Posted by Esther at 10:30 PM

D.C. in August? INSANITY! But I'm glad you had a good time and were able to get away from the trip. I was VERY disappointed in the American History Museum - I was expecting many more exhibits of pop culture - I still cannot believe it was such a small display - and none of the collection that I wanted to see was on available for viewing. The First Ladies' dresses were fine. Overall, I don't care to revisit unless I know for sure that items are on display. I will continue to be satisfied at visiting D.C.'s art galleries in the future or just stick to the theatres which is usually what I go for anyway.

Hi Sarah, thanks for the comment! My main reason for going was to attend my friend's son's bar mitzvah and unfortunately, he had to pick the hottest month of the year in which to turn 13. ;-(

I agree, the pop culture display was very small. The American History Museum has been undergoing renovations and I thought they were finished but I guess not. They were still doing work on the Mall entrance. So hopefully when it's finally done there'll be more items on display.

Anyway, I had a chance to spend some time with friends I hadn't seen in about six years and that was wonderful.

Glad you enjoyed your time in D.C.! I haven't been there since I was a tot.

Once upon a time Washington was a place I wanted to live but it never worked out. Luckily I've always had friends there to visit. Hope you get back someday.

I always, always, always wanted to go to D.C. but never had the chance until after I moved to New York. Now, I can't believe how close, cheap and easy it is to go there. Of course, I'm lucky that I have many friends there and it's so easy to pop down for shows in the area - so many great theatres. I was also so surprised at the number of galleries and that they are free. I absolutely love the Phillips and the National Museum of Women in the Arts. Hopefully, the pop culture section at the History Museum will be expanded - they have a number of really exciting Broadway theatre items including original costumes in their collection and it's a shame that they are not on display.

Glad you had such a great time! It's one of my favorite cities, too, and I miss living there. And I'd gladly take DC any month of the year, although I tend to stay indoors during August. Fortunately, there's a lot to do in that respect: the U.S. Capitol, the White House, the National Archives, the Smithsonian museums, Ford's Theatre and great restaurants, not to mention some exceptional live theatre.

Hey Sarah, I was at the Phillips Collection years ago and enjoyed it. But I have to admit I didn't know there was a Museum of Women in the Arts. Maybe I can check it out on my next trip. And I'd love to do some theatergoing, too. And it would be great to see some of those Broadway-related items on display - if not in Washington then in New York!

Thanks, Steve! Luckily, like Sarah I have friends in the area. So even though I was never able to realize my dream of living in Washington, I've have some wonderful visits. You're both right, there is so much to do. Unfortunately, none of those visits (except for the first one) has ever included any theatre. But someday!