Blogging has been kind of anemic lately but I do have some good theatre-related quotes to share: 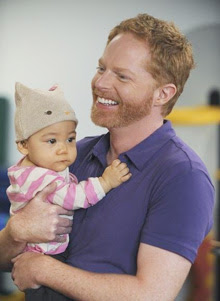 Vanity Fair has a Q&A with the very funny and sweet Jesse Tyler Ferguson. He talks about his Emmy nomination for Modern Family and the difference between theatre and television:

"The paycheck! (Laughs.) You definitely get paid much more for TV, but it’s also nice to do a show eight times a week and really hone in on what that character is. You can say, “Tomorrow I’ll try it this way or tomorrow I’ll try it that way.” But I love the immediate response you have to make with TV. Once you do it, and once it’s on film, that moment’s gone and you have to move on to the next."

Modern Family was my favorite new TV show of last season and I'd love to see Ferguson onstage someday. Hopefully he'll continue to fit theatre in around the shooting schedule, like he did this summer with Shakespeare in the Park

And one of my favorite musicals, Hair, which closed on Broadway earlier this year, earned a mention in The Wall Street Journal. It was included in a story about the Theatre Development Fund's effort to encourage theatergoing by underrepresented groups in New York City.

The program, called New Audiences for New York, is a great idea. This past Broadway season, it brought more than 30 groups - from churches, schools and senior organizations - to see shows and participate in discussions about them.

But one paragraph made me wince:

Cathy Cahn, who led a group from the Queens-based group Services Now for Adult Persons (SNAP) to "Hair," discussed how seniors valued the chance to see a show and talk about an era they remembered well: "They don't travel into the city, and Broadway is prohibitively expensive. It gave us a different insight. It gave us so much to talk about afterward."

Is that what it's come to: Hair, the perfect show for gulp, senior citizens. I suddenly feel very old.
Posted by Esther at 9:49 PM