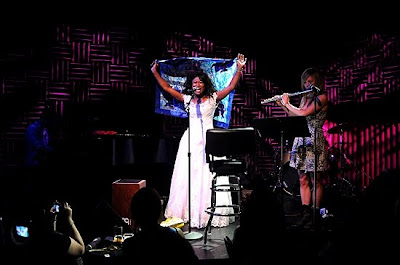 I love checking off new experiences during my trips to New York. This time, I made my first visit to Joe's Pub, named after Public Theater founder Joe Papp, for the Broadway Impact concert with cast members from American Idiot.

I haven't seen the musical so it was nice to hear new performers like Christina Sajous, above, and familiar ones, like Rebecca Naomi Jones, who was in Passing Strange on Broadway.

It was a fun way to end the weekend and at $25 for a ticket, very reasonable. I'm glad my fellow blogger Linda, from Pataphysical Science, invited me to go along. (Although be warned that not all cast members participate and they don't necessarily sing songs from the show.)

While I got a little squished in the packed bar (tables go fast) I was happy to be part of a crowd supporting Broadway Impact. It's a community of actors, directors, stage managers, fans - anybody who's ever worked on or been to a Broadway show - united in the fight for marriage equality.

If I never went to the theatre I'd still support marriage equality - for my friends and because it's the right thing, the American thing, to do.

But being a theatre fan makes it more personal. How can I tell people whose work I admire - onstage and behind the scenes - that if they're gay or lesbian, they shouldn't be allowed to marry the person they love?

Tickets are on sale for the final Broadway Impact concert of the summer at Joe's Pub, at 7 p.m. Aug. 23, featuring cast members from the Tony-winning musical Memphis.

I can't think of a more fitting finale than Memphis, in which a white dj and a black singer fall in love in the 1950s, when it was not only illegal for them to get married in their home state but dangerous to even be seen together as a couple.

Unfortunately, I won't be in New York City for the Memphis show but I'm looking forward to returning to Joe's Pub for another Broadway Impact concert.

It would be great if the cast of every Broadway musical agreed to do one.
Posted by Esther at 9:23 AM