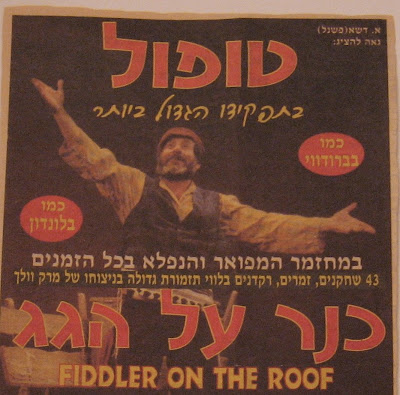 This ad from an Israeli newspaper says (reading from right to left): Topol, in his biggest role ever, like Broadway, like London. Kinar al ha gag - Fiddler on the Roof.

I've mentioned before that my introduction to Fiddler on the Roof was seeing it in Tel Aviv, in Hebrew, in 1998, with Chaim Topol playing Tevye. At the time, I'd never even watched the movie.

Today, I'll see this classic musical on stage again, this time in English. And once again with Topol, who is beginning a nationwide farewell tour in the role.

That sounds wonderful Esther, I hope you fall in love with it all over again!

Thanks for the comments, Sarah and Dale. It is a great story. I remember being really moved by it even though my Hebrew wasn't fluent enough to understand everything. So I'm psyched to see what I missed. Just another hour!

Oh, can't wait to hear what you think of the new tour. Rumour has it that it's being announced for Toronto for later this year (plus it's already on the website so not really a secret but the theatre here would like to think so)

Can't wait to hear what you think. At least this time, you'll be able to understand everything!!!

There's a lot to be said for understanding everything, especially if it's your first time seeing the show! I definitely missed a lot of the humor by seeing it first in Hebrew.

It's much better to do it the way you did with "Wicked" - you knew it so well in English before you saw it in German or Japanese. I only had a very general idea of the plot of "Fiddler on the Roof" so I was definitely at a disadvantage.

It was a wonderful experience and I'm glad I did it. But I'm also glad I've now seen it in English. The circle is complete. :-)