The ethics of Spider-Man's marketing 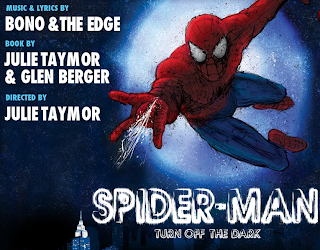 I haven't said very much about Spider-Man: Turn Off the Dark because I haven't seen the show and I didn't feel like I had anything to add to the debate that hadn't already been said.

But I just read a column about the ethics of professional critics reviewing the musical while it's still in previews and this jumped out at me:

"Broadway audiences know that previews are early glimpses of works in progress, and that is part of their appeal. The audiences for previews are part of the creative process, for how they react to a performance will help decide what stays and what gets cut. The prices they pay for the privilege of being Broadway guinea pigs are fair if they choose to pay them."

Sorry, that holds true for a portion of the audience. But 63 percent of Broadway tickets are purchased by tourists and I bet many of them have no idea when a show is in previews or exactly what that means. For some, Spider-Man may be their first Broadway experience.

In fact, if you go to the Spider-Man web site, it says "Now playing on Broadway." It doesn't say in previews or that the musical is subject to change. I don't think the word "preview" is even mentioned on the web site, so I don't know if it's a "choice" on the ticket-buyer's part or simply not knowing how privileged they are to be attending a preview performance.

And if they are familiar with previews, they may have purchased their ticket thinking it was after the much-delayed opening night, now scheduled for Feb. 7.

I just checked Ticketmaster for a performance in late January, while the show is still in previews, and ticket prices range from $76.50, for the cheapest seat in the balcony, to $289, for a premium seat in the orchestra. If you have a family of four, $306 is a hefty price to pay to be a "guinea pig" for director Julie Taymor and rest of the creative team.

You can debate the appropriateness of professional critics buying a ticket and writing a review before opening night. But please, don't tell me that Broadway audiences fully understand what a preview means, especially when the show's own web site misleads them.

If you want to talk about ethics, let's talk about the ethics of producers who fail to tell the ticket-buying public exactly how much of a rough draft they're spending their money to see and charging them plenty to be part of a work in progress.
Posted by Esther at 10:45 AM

You make excellent points. While I sometimes enjoy seeing a preview, the ticket prices alone make it less than evident that the fine tuning may not be complete.

Your comments are almost spot-on, Esther, as usual. I have to ask, though, why you are singling out Spider-Man for this heinous injustice against an unsuspecting tourist population. The days of a separate price structure for previews are long gone - I believe Cats started that trend back in the early 80's. So when a show does offer a preview discount (I'm not talking about those at TKTS and other online discounts)like Women on the Verge did, it is the exception, not the rule. Spider-Man doesn't even have the most expensive tickets! A Little Night Music tops out at $157, and the highest Premium seat is Jersey Boys at $350. Sure, a lot of people who don't know better, or who simply want the best seats buy at the box office. But of that 63% of tickets sold to tourists, how many are part of tour packages (add-on $$ goes to the tour organizer, not show producers)and how many are purchased at a hotel concierge (again add-on $$ doesn't go to the producers). And still, having spent many an hour on the discount sites and in the TKTS line with tourist friends myself, don't think that all or even most tourists are getting the shaft. It is called shopping. And people the world over do it. Buyer beware, right?

So, I agree with you. At the very least it should be well-posted that a show is in previews and may not be "complete." But I have to wonder why it is that you, like everyone else, has to single out Spider-Man, when they aren't they first,only, or last show doing it. I'll expect a similar blog from you when Priscilla and Catch Me If You Can open, too. They don't have a Preview price structure, and their top ticket is even higher than Spider-Man.

Finally, for the record, I have seen Spider-Man, unfinished as it is. History in the making is priceless. I knew it was a preview and I still paid full price. Having seen it, I'm surprised the tickets aren't MORE expensive.

In the past few years I have seen a few shows out of town before they hit NYC - Young Frankenstein, 9 to 5, Priscilla Queen of the Desert among them (what many are arguing Spidey should have done too). I can say for those shows, I paid roughly about the same ($100) as would be paid when the show hit NYC. I'm seeing "Working" in Chicago in this February and I think the tickets were $88. Some say it has Broadway transfer hopes too.

What is the solution here? Clearly a show can charge those prices to go thru the same creative process out of town - but if they try to do it in NYC we are not happy. There seems to be such a deeply rooted tradition about Broadway shows being "ready" when they get here that when one tries to open cold it gets clobbered. Just look at Women on the Verge.

Obviously, I disagree. 1)Anyone who pays three figures for a ticket and doesn't know what they are paying for (when the fact that the performances are previews is a Google-shot away) can't blame the producers. 2) A review of a preview is per se misleading, because the next performance could be and often is very different. 3) Theater-going tourists are not as clueless as you seem to think, 4) Just because a performance is rough or unfinished doesn't mean is isn't entertaining or worth the money to an audience member, 5) Pulling one paragraph out of a much longer post is misleading, and 6) It is still unfair and unprofessional to review a show in previews....for all the other reasons I stated.

Right on. And basically, if they want to charge full price, fine, but they can't complain about journalists who come to review the show before opening night (even though it was around the same time of the ORIGINAL opening night... ahem...).

Thanks, Dale. I try to stay away from early previews but sometimes that's just when I happen to be in New York and I know I won't be back anytime soon. So if I want to see a show, it's either a preview or risk not seeing it at all!

Thanks, JK. I always appreciate the dialogue and you make me think, as always.

I decided to write about Spider-Man because the paragraph about previews stuck in my craw. I don't agree that today's average Broadway theatergoer knows they're buying a preview ticket or what it means, especially in a technically complex, untried show like Spider-Man. They haven't signed on to be "guinea pigs."

And I view Spider-Man as much more of a tourist draw than Catch Me If You Can or Priscilla. Because of the name recognition, the appeal to kids and adults, it's more likely to be a first Broadway experience than the latter two.

Hey Doug, I understand that it's tough to open a show cold on Broadway. Look at Elling, which wasn't technically complex but opened cold and failed to draw an audience. (Although I liked it.) I guess, like you said, there's a different expectation today. Anyway, I'll be looking forward to your thoughts on Working. I'm a big Studs Terkel fan, I even met him once!

Thank-you for reading my post and for your comment, Jack. I respect your viewpoint and I appreciate your adding to the conversation.

I pulled out that one paragraph from the column because it seemed to be the core of the writer's argument: everyone knows they're buying a ticket to a preview and understands what that means. I just don't agree. (I really didn't intend to weigh in on the propriety of the reviews.)

I realize that not all theatergoing tourists are clueless but why should they have to hunt for the information? If I want to know about any other product, I go to the company's web site. That, and Ticketmaster, are the natural places for people to look.

I agree that you can still get a very entertaining performance in a preview. And I still hope to see Spider-Man. I don't wish it any ill-will.

But just like all Broadway shows, I wish it would be a little more upfront about previews, as well as when above-the-title stars are on vacation.

Hey Vance, thanks for the comment! You make a good point about Spider-Man, there probably are people who bought tickets thinking it would be after opening night. And like I said, I think we bring different expectations to the table than someone who sees "one" Broadway show on what may be their annual trip to New York or even their first trip.

Esther I'm so glad you posted about this. I'm a newbie theater-goer and I had no idea about this issue of previews basically being a rough draft. I also had no idea that I should be careful about whether or not a Broadway show was a preview or not. I agree with you that not every theater goer is that savvy. But I am now. Thanks!

Thanks, Pam. Spider-Man is kind of a special case because of the technical requirements and the fact that there was no out-of-town tryout. Most shows aren't this complex or they've come from some other place first. So there may not be as many changes during the preview period. But if you can wait until closer to opening night, when the show is "frozen" or afterward, I think it's usually a good idea. On the other hand, if you're in New York and you really want to see it, go for it! There's always a chance the show won't make it much past opening night.