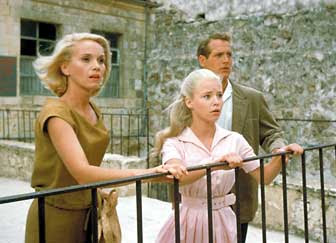 I have to say a few words about British actress Jill Haworth, who died Monday in Manhattan at age 65.

The New York Times obituary noted that she was the original Sally Bowles in Cabaret, which I didn't realize until I watched the PBS documentary Broadway: The American Musical. I knew her as Karen Hansen from the 1960 movie Exodus, based on the Leon Uris novel about the birth of Israel. (That's her with costars Eva Marie Saint and Paul Newman.)

In fact, I was surprised when Haworth's name came up in the documentary and wondered if it was even the same person but it was, her blond hair covered by a dark wig. To me, Sally Bowles was Liza Minnelli from the movie. It never occurred to me that someone else originated the role on Broadway.

It's interesting that Haworth's two biggest performances serve as historical bookends - a bohemian nightclub singer in Germany as the Nazis are rising to power and a young Jewish girl trying to build a new life after World War II.

I watched Exodus more than once before visiting Israel for the first time in 1995. That was a time in my life when I pretty much ate, slept and breathed anything to do with the place, which culminated in my moving to Tel Aviv for a year. Today, it's hard to believe I was so obsessed.

I realize the movie is long and overly sentimental but Haworth was so sweet and self-assured. My Israeli tour guide dismissed Exodus with some embarrassment, saying of Paul Newman's character, nobody could be that perfect.

I still find the film incredibly moving, especially when the refugees are being held on Cyprus and later, on board the Exdous, desperate to break the British blockade of Palestine. In his review for the Times, Bosley Crowther called Haworth's performance "fresh and deeply poignant."

The Times obituary says information about her family and survivors wasn't available. But she leaves a performance that has stayed with me.
Posted by Esther at 9:30 AM