My 99 cents on The Book of Mormon Broadway cast recording 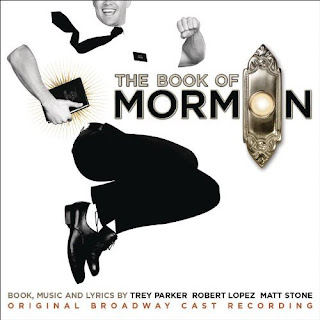 I haven't seen The Book of Mormon, Broadway's newest Tony winner for Best Musical, but Amazon had the cast recording on sale for $1.99 as an MP3 download. With the way tickets are selling, that might be as close as I'll get for awhile.

Because I had a credit, it ended up only costing me 99 cents! So here's my 99 cents on The Book of Mormon. After listening a few times to the songs and the snippets of dialogue two things struck me - one good and one not so good.

The songs performed by the young Mormons who are about to embark on their stints as missionaries are catchy and upbeat and funny. The lyrics are sweet and heartfelt about their desire to spread their religious faith and make the world a better place.

In fact, they seemed so positive, so earnest and sincere, that I'm surprised the Mormon Church isn't already using them as recruiting tools. Specifically, "Hello," "Two By Two" and "I Believe" are virtual love songs to the Church of Jesus Christ of Latter-day Saints.

But the other thing that struck me about The Book of Mormon was the portrayal of the village in Uganda where Andrew Rannells and Josh Gad, who play the musical's two Odd Couple-like missionaries, are sent.

The Africans, in sharp contrast to the clean-cut, All-American and God-fearing Mormons, are presented as violent, profane, ignorant and easily led. I can't even bring myself to write what the villagers believe will "cure" them of AIDS.

The one appealing Ugandan character, played by Tony winner Nikki James, does get a nice song where she talks about her hopes and dreams, if she can only reach the paradise of "Sal Tlay Ka Siti." (Oh hah, hah, that's a joke on the Ugandans' inability to pronounce Salt Lake City.)

I know that The Book of Mormon was created by Trey Parker and Matt Stone, the South Park guys, and Robert Lopez, the guy from Avenue Q. I realize that the clash of cultures is what this musical is all about. It's a satire - it's supposed to be irreverent and skewer everyone. But based on what I've heard, the skewering just seems a little one-sided.

I'd still like to see The Book of Mormon someday. I realize it's unfair to judge a musical solely on its cast recording. I may be hearing things out of context, not getting the full picture of the story and characters. But for now, that's the only thing I have.
Posted by Esther at 5:25 PM

I understand your impression, but you might change your mind after seeing the show. The Africans are actually very sympathetically depicted in the context of the show, just miserable from disease, violence, and hunger. They're not as easily led as the album would suggest - as revealed in a scene late in the second act which I won't spoil for you here.

The Mormons boys are handily skewered as being naive, ignorant, and repressed. "Two By Two" and "I Believe" are satiric pieces which evoke great laughs at the expense of the Mormon faith. There's plenty of satire to go around.

I hope you can see the show soon and with the original cast. The new ticket prices won't help, but there's always the lottery.

Thanks for the comment and I appreciate your perspective. It's good to know that the satire is spread around. I'm sure I'll see Mormon someday, even if I have to wait for the tour!

Yah, basically it's skewering Mormons AND Africans but at the same time, when you hear what is going on in Uganda nowadays, maybe the social commentary is deserved. Still, there are positive portrayals too and overall, there's a positive message and a joyous feel to it.

Thanks for the comment, Vance! I guess I was just struck by how sweet the missionaries sounded versus how violent and profane the Africans sounded. It just seemed like a very easy and safe satire: clean-cut white boys dropped into deepest Africa. All your stereotypes confirmed and hilarity ensues. But I am willing to give it a chance, if I can ever get a ticket!

I was anxious to see this show even before it won the Tony. I think this is one that both my husband and I would like. I'd love to see it in NYC, but may need to wait for the tour. I suppose that's better than not seeing it, right?

Hey Pam, you and your husband should definitely try to see it in New York! Just pick a date a few months from now. ;-) I checked Telecharge and The Book of Mormon is selling tickets through the end of March. (I mean, it'll run longer but that's all they have for sale right now.) Get them before the scalpers!

i bought the 1.99 album too but haven't listened to it too much yet. i have tickets for september (i planned my nyc trip around this show!), so i don't want to become too familiar with it before seeing it live.

"i believe" that upon seeing the whole show live, it will be much more layered and complex than your first impression. and that it will be a great good time. :)

Hey Jill, thanks for the comment. Wow, you're lucky you got a ticket to the Book of Mormon! And yeah, I would hold off listening to the score. Like I said, I am listening to the songs without of context of the story. I'll definitely be looking forward to your thoughts when you see it onstage.

no luck involved - i ordered full-price tickets 4 months ahead of time. and BEFORE the big tony wins!