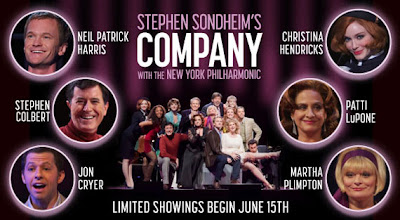 I saw Stephen Sondheim's Company with the New York Philharmonic last night and unlike my two previous theatre at the movies outings, this one went off without a hitch. The screening started on time, ended on time, the sound was perfect - and I really enjoyed it.

The only thing missing, in my opinion, was an intermission. The 20-second pause after the 90-minute first act wasn't enough. The movie theatre seats were pretty comfy but still, after a while you need a break.

I missed the 2007 Broadway revival with Raul Esparza in the theatre but I saw it on PBS. Honestly, it didn't really stick with me. I remember there were parts where I laughed but overall, the musical seemed kind of somber. (As I recall, the set was dark and everyone was dressed in black.)

This time, Company in concert was lighter and much funnier. And I got into the songs a lot more. I loved the second-act opener "Side By Side By Side / What Would We Do Without You," a chorus line-like song-and-dance number. (The cast performed it on the Tony Awards and you can watch it here.)

Neil Patrick Harris plays the commitment-phobic Robert, whose friends are all trying to get him to settle down and get married, just as their own marriages are in various states of collapse. Harris didn't display the same depth as Esparza, especially in "Being Alive," but he's got a sweet, clear voice. In the close-ups I could see his larynx and neck muscles working hard.

Martha Plimpton and Stephen Colbert were hilarious as husband and wife. They're terrific comedic actors, handling the bickering and the physical humor equally well. It was great to see Christina Hendricks, the bold and sexy office manager Joan in Mad Men, play a flighty and sexy airline stewardess. Anika Noni Rose was a revelation as Marta, one of Bobby's girlfriends. What a powerful voice in "Another Hundred People."

Well, I could go on. Patti LuPone's alcohol-drenched "The Ladies Who Lunch" was terrific. Overall, it was a great 2 1/2 hours and it definitely made me want to go out and get a cast recording. There are several more dates for Company at the movies, so check your local listings!
Posted by Esther at 11:30 AM

20 second pause? Yikes. We got a full 20 minute intermission here. Glad you enjoyed it apart from that — the music is a gem, and this was a great example of how rich and malleable the show itself is. I loved the Doyle production but this works just as well, and most of the performances seemed to come across better on screen than they did live at Avery Fisher. But then you know my standard belief: any Sondheim production is an event not to be missed.

Yeah, I've heard the songs before but this time they really clicked. It's funny the things you get fixated on when you see something on a big screen - I kept thinking how soft Neil Patrick Harris' brown leather jacket looked and how well it fit him!

I'm going tonight (06/16) and I can't wait! I think you'd have liked the Raul Esparza revival better live. I, too, thought the video version was a bit sterile. In the theatre, it was ELECTRIC.

Hey JK, can't wait to hear what you think! Yeah, I've had mixed results watching Sondheim on DVD. I wasn't crazy about Sunday in the Park with George or Into the Woods either but I love Sweeney Todd on DVD with Angela Lansbury and George Hearn!

Esther, this one when "better" because it was not live like the other 2 you saw. It was a film, just like any movie. The others were live broadcasts so of course, just in like in live theatre, anything can happen. Glad you're going and enjoying. I hope you start going to the Met Opera broadcasts - they really are fantastic with great intermission features.