Theatre at the movies: The Importance of Being Earnest, in HD

If you're like me and you can't hop on a plane or train to London or New York whenever you want, then seeing some Broadway or British theatre filmed onstage and shown at the movies is a terrific option.

But sadly, after two recent excursions I've come to the conclusion that the operators of America's multiplexes (ok, one in particular) haven't yet worked out all the kinks.

So, in the spirit of constructive criticism (after all, I want these screenings to be successful and continue) here's some friendly advice:

Get the technical stuff down beforehand.

In April, I saw Frankenstein as part of the second season of NT Live, from Britain's National Theatre. It took the projectionist 45 minutes to get the digital file up and running. As a result, he fast-forwarded through the making-of segment that I wanted to see.

Start the show at the time that's advertised. 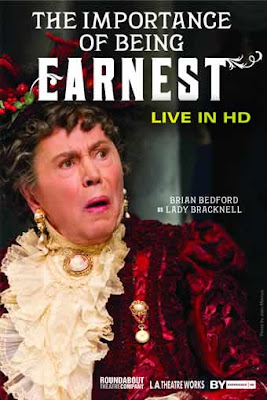 Yesterday, I was at the same multiplex at 6 p.m. to see the Broadway revival of Oscar Wilde's The Importance of Being Earnest. I got to my seat at about 5:45 and host David Hyde Pierce was already finishing up his backstage tour. (Although the play itself didn't begin until 6.)

There needs to be some marketing punch.

The only way I knew Earnest was playing there was because I signed up for an e-mail alert from the Roundabout Theatre Company. The multiplex website never listed the title, just called it an "NT Live" production, which it wasn't. I even e-mailed them but I never got an answer. There was nothing about it in their Twitter feed or on their Facebook page either. Lost opportunities.

Turn down the volume, I'm not deaf.

The sound was so loud that I thought I might have to give up and go home. I guess someone must have forgotten to turn down the volume from the action movie that played there earlier in the day, I don't know. But it was unbearable. Thankfully, about 10 minutes in they adjusted it.

6 o'clock is too early unless you're a student or retired.

There were only about a half-dozen people in the the place, a fraction of the audience for Frankenstein, and it's no wonder - most people were probably just getting home from work. Maybe they would have gotten a bigger audience with a little publicity and a later showing.

Anyway I liked the play, especially Tony nominee Brian Bedford as the aristocratic and snobbish Lady Bracknell. He was a hoot! In fact, I thought Earnest dragged a bit when he wasn't onstage, which was the entire second act. Still, if you're a theatre fan and you have a chance to see it, definitely go. There are screenings through the end of the month.

As I've said before, watching a play or musical at the movies is a different experience. You don't get the adrenaline rush that comes from seeing something live, with a packed audience. I laughed out loud a few times but I was the only one. And with a movie, the camera determines where your eye goes to a great extent. At the theatre, you decide.

I've already got my ticket in a couple weeks for the concert version of Stephen Sondheim's Company, with the New York Philharmonic, which was filmed in April. This time it'll be at a different movie theatre chain, so hopefully things will run more smoothly. I'll let you know.
Posted by Esther at 10:00 AM

Sounds like they could use your help in ironing out the kinks!

They sure could! I got the manager's business card so I'll have to send him a link to my blog. ;-)