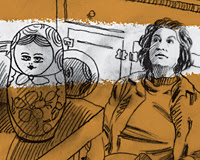 In February, I saw Susannah Flood give a terrific performance as Emily Webb in Trinity Repertory Company's production of "Our Town." Her mannerisms and speech perfectly embodied a teenage girl - the intelligence and curiosity, the awkwardness and insecurity.

Flood, who was then a student at the Brown University/Trinity Rep Consortium, has since earned her MFA and her Equity card. This month, she's back at Trinity, again giving a memorable performance as a teenager, but this time, a 21st-century one in Kathleen Tolan's two-person play "Memory House."

It's New Year's Eve and Flood's Katia is a high school senior, a child of divorced parents who was adopted from Russia at a very young age. She arrives back at her mother's apartment after a visit to her father's house across town. Her father is a college professor and her mother, Maggie, played by 28-year Trinity veteran Anne Scurria, is a former dancer who now has an office job.

Katia has just a couple of hours to complete an essay for her college application and get it in the mail by midnight, and we're not altogether certain that's going to happen. Going away to college is a step that will change both Maggie's and Katia's lives and over the course of the play, they examine their past, present and future.

The set, designed by Eugene Lee, consists of a small, sparsely furnished living room strewn with books and papers and a kitchen with a working oven. As the audience watches, Scurria makes a blueberry pie - kneading the dough, rolling out the crust, pouring in the filling, and placing it in the oven. We can see and smell it baking. It's a great device because it gives Maggie something physical to do.

Katia's essay has to be in the form of a memory house, a place where she stores her thoughts, experiences and recollections of her past. But she's troubled that she doesn't remember enough about her past, before she was adopted. Without those memories, she's unsure of her place in the world, and it makes her normal teenage sense of insecurity even worse.

She's at a point where she's anxious about her future, questioning what she wants to do with the rest of her life, wondering how she can make a difference in the world. Rather than seeing her parents as the people who rescued her from a dreary, loveless life in an orphanage, she sees them as privileged Westerners who snatched her away from the country where she was born.

That sense of being adrift manifests itself as anger toward her mother. Flood rolls her eyes, bites her lip and sulks as she slouches around their apartment. She talks about her "real" mother and expresses a desire to go back to Russia. She almost taunts her mother as she asks why she gave up doing something she loved, how her father's life seems so much better and happier, and wonders whether she should even go to college.

Scurria also gives a wonderful performance, imbuing Maggie with an abundance of humor, patience and common sense. Maggie is obviously hurt by her daughter's barbs, and makes the occasional sharp retort. She's clearly exasperated by Katia's procrastination over the college application. But overall, Scurria's portrayal is as warm and homey as the pie baking in the oven.

Tolan writes in a very believable, true-to-life way about the relationship between mother and daughter. There's a danger of having "Memory House" turn into a dialogue between a sullen adolescent and her exasperated mother. But Katia's questions about her past give the character a great deal of poignancy. Flood and Scurria make both Katia and Maggie very sympathetic and likable.

Trinity Rep's artistic director, Curt Columbus, says that "Memory House" examines questions of identity, both personal and national, and questions about how to create a "home" when the rules of "homemaking" have changed. Tolan has created "something which speaks to the uncertainty of the modern world in general, and of the turbulence in modern family dynamics within that world."

Katia and Maggie spend most of the play arguing in a way that will surely resonate with anyone who's ever been a parent or a child. Scurria and Flood really make this relationship work. By the end of the play you realize that despite the turbulence, these are two people who truly love each other and care about each other.
Posted by Esther at 6:51 PM

Oh I saw "Memory House" at Playwrights Horizons a couple of seasons ago starring Dianne Wiest and Natalia Zvereva. I thought it was such a beautiful journey for the mother and daughter. Thanks for reminding me of this work.

Wow, that's great that you saw it! I wasn't sure where else it had been performed. From the name, Natalia Zvereva obviously sounds Russian. It would be interesting to see how a Russian-American actress would play the daughter, whether there was a hint of her Russian background left. Susannah Flood was clearly the typical American teenager. Also, as I was leaving I heard someone say that the actresses sounded just like her and her daughter. So obviously, it resonates with a lot of women.

As I recall from the playbill, Natalia had a similar story as the daughter. It was the premier of the play and the first night of previews as well. I was fascinated by Dianne making and baking a pie on stage. But, it was the story that I loved.