Raising the curtain on 2009 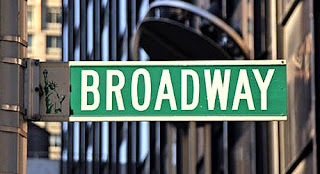 Okay, 2009 is here and I'm psyched for another exciting year of theatergoing.

Locally, I'm looking forward to seeing productions of two classic plays, A Raisin in the Sun and Awake and Sing; plus some more contemporary works, including David Hare's The Secret Rapture and A.C. Grayling and Mick Gordon's Grace.

Then, there are touring companies of the musicals A Chorus Line, Fiddler on the Roof, The Color Purple, Spring Awakening, Chitty Chitty Bang Bang and last but not least, Annie, to bring a little joy into my hard knock life. (Tomorrow, tomorrow!)

Of course, I'm hoping to take in some more Broadway shows and of course, I'm excited by almost everything that's coming up. Here's a preview of the plays and musicals opening on Broadway this winter and spring.

And here are the shows I'd most like to see. Yeah, I know, it's a very long list. The chances of my getting to New York City for all of them by the end of June are remote - unless they start scheduling performances at 10 a.m. on weekends. Still, a girl can always dream, can't she?

9 to 5: I haven't seen the movie in years but I remember that it was very funny. Even though the musical doesn't have Dolly Parton, it does have Parton's songs and I'm sure the story, about a group of working women trying to get even with their sexist, egotistical boss, will be just as much of a hoot on stage. Plus, Vance and Linz McC saw 9 to 5 in Los Angeles during its pre-Broadway tryout and really enjoyed it. First preview: April 7. Theatre: Marquis

33 Variations: I'm not a huge Jane Fonda fan but the subject - a musicologist obsessed with a Beethoven mystery, sounds promising. And I have an enormous amount of respect for playwright Moises Kaufman from The Laramie Project, so I'm interested in whatever he's doing. I think there's piano music involved, too. But sadly, no violins. First preview: Feb. 9. Theatre: O'Neill

Accent on Youth: Maybe the revival of this 1934 work about a dramatist and his muse isn't on everybody's list of the most highly anticipated shows but I have my reasons. After seeing a wonderful performance from David Hyde Pierce in Curtains in 2007 - my very first musical on Broadway - and then meeting him at the stage door afterward, I've definitely become a fan. Anything he does, musical or play, I'm there. I hope he remembers me! First preview: April 7. Theatre: Friedman

Blithe Spirit: I wasn't a big fan of Noel Coward's 1940s drawing-room comedy when I saw it at Trinity Repertory Company in April. But with Christine Ebersole, Rupert Everett and above all, Angela Lansbury as the eccentric psychic Madame Arcati, I definitely want to give it another try with this Broadway revival. First preview: Feb. 26. Theatre: Shubert*

Guys and Dolls: I've only seen the movie version, so I'd love to see this classic musical on stage, no matter who's in the cast. Still, I have to admit that Oliver Platt and Lauren Graham don't exactly have me doing cartwheels. Not that, you know, I could ever do a cartwheel even if I wanted to. But I also have to admit that I've never seen a single episode of Gilmore Girls, so maybe that's my problem. First preview: Feb. 3. Theatre: Nederlander*

Hair: My biggest regret of 2008 was missing Hair in Central Park, so this is the show at the very top of my list for 2009. I've always been interested in the history and culture of the 1960s and I've always loved the songs. I saw Hair on tour once, long ago, but seeing it on Broadway would be a real treat. There's been quite a bit written about the problems backers have had raising money for the musical, but new producers have stepped forward so hopefully things are on track. First preview: March 6. Theatre: Hirschfeld

Impressionism: I like seeing new plays and I'm curious about this one, by Michael Jacobs, which revolves around the relationship between a photojournalist and an art-gallery owner. And it does have Jeremy Irons, which is a big plus. Yeah, I know, last time I got excited about a Jeremy it was a bit of a letdown. But I'm hoping this time it'll be different. First preview: Feb. 28. Theatre: Schoenfeld*

Joe Turner's Come and Gone: Sadly, the most recent August Wilson play on Broadway closed before I had a chance to see it. I don't really think I can consider myself a student of postwar American drama until I've seen one of this plays, so I'm looking forward to this revival, directed by Bartlett Sher. It's the second in Wilson's 10-work cycle chronicling African-American life in the 20th century. First preview: March 19. Theatre: Belasco

Mary Stuart: Transfers from the West End have been a mixed bag for me. Some I've loved, some made me wonder what all the fuss was about. So I'm a bit wary about this play, which deals with the relationship between Britain's Queen Elizabeth I and Mary Queen of Scots. (Haven't we seen a lot of Elizabeth I in the past few years?) But I've heard that Janet McTeer is amazing as the Scottish monarch. First preview: March 30. Theatre: Broadhurst

The Philanthropist: What is this play about? I don't know. (Just kidding. It's about the lives of academics at a British university.) Yeah, too often I pick my must-see shows based on a movie or tv actor who's in the cast. A lot of times that leaves me one disappointed theatergoer. Still, hope springs eternal, as they say. I'm excited at the prospect of seeing Matthew Broderick - Mr. Ferris Bueller - on stage! And I think he's just as much a theatre actor as a movie actor anyway. First preview: April 10. Theatre: American Airlines*

Waiting for Godot: Don't ask me why but for some reason I was a big fan of theatre of the absurd when I was in high school, without ever actually seeing any of the plays performed. Samuel Beckett's Waiting for Godot is probably the classic of the genre. And the cast - Bill Irwin, Nathan Lane, David Strathairn and John Goodman, sounds terrific. First preview: April 10. Theatre: Studio 54.

West Side Story: The music is great, the choreography is awesome and who doesn't love the story of Romeo and Juliet? I've enjoyed Matt Cavenaugh both times I've seen him on stage, in Grey Gardens and A Catered Affair. But I can't quite picture him as a gang member. Still, that's why they call it acting. Vance has seen the tryout in Washington, D.C., several times and raves about it. First preview: Feb. 23. Theatre: Palace*

And there's so much to see off-Broadway:

Happiness: A musical about a group of New Yorkers caught on a subway train. Could there be a better subject for someone who loves Manhattan as much as I do? Plus, the Lincoln Center production has music and lyrics by Scott Frankel and Michael Korie, of Grey Gardens, and a book by John Weidman. And, this will be very exciting to all of my former coworkers in Syracuse, none of whom read my blog. It's at the Mitzi Newhouse! First preview: Feb. 27.

Humor Abuse: Something about the description of this one-man show by Lorenzo Pisoni, (Nugget in Equus), at the Manhattan Theatre Club, intrigues me. "Humor Abuse is the unique story of Pisoni’s upbringing as the youngest member of the Pickle Family Circus, the Bay Area’s tiny big top that entertained thousands of people worldwide and launched the careers of several legendary performers." It sounds so unique. First preview: Feb. 19

Mr. and Mrs. Fitch: I missed Douglas Carter Beane's two previous shows - The Little Dog Laughed and Xanadu. But I know that he's supposed to be a very witty writer. And the subject of his new play this spring at the Second Stage Theatre, husband and wife gossip columnists, sounds like a great recipe for comedy. Here's the description: "When the social circuit no longer provides juicy morsels, they find that great celebrity can appear out of thin air."

Our Town: Really - Our Town? Seen it. But then I read a review in The Chicago Tribune by Chris Jones and it was such an incredible rave I was practically salivating at the thought of seeing this play. He calls director David Cromer's interpretation of life and love in a small New England town "revelatory." Cromer is also Jones' pick for Theatre Chicagoan of the Year. The play opens, with a different cast, at the Barrow Street Theatre in February.

The Singing Forest: Another playwright whose work I've been waiting to see on stage is Craig Lucas. I like historical fiction and the plot from this Public Theater production sounds pretty intriguing: the play "takes you on a passage through time—from today's world of Starbucks, celebrity and therapy to Freud's inner circle in 1930's Vienna and to Paris at the end of WWII." First preview: April 7.

* Denotes Broadway theatre I've never been to.
Posted by Esther at 1:00 AM

In West Side Story, Tony is not a gang member.

but Tony is a former gang member who started the Jets. So he WAS one. supposedly. Yah. I didn't really believe Matt was one. he's too good and pretty boy and proper. Still, whatever, i loved the whole production anyways!

hmm... I just realized I've already seen 3 of the new musicals coming to Broadway now. I'll just need to catch up on Story of My life, Guys and Dolls and Rock of Ages.

So many new plays though but the timing on all of them means I'll miss something unless I come twice at least (eeks., not sure I'll have time or money). (cause I would have liked to see Hedda Gabler too).