A Raisin in the Sun

Next month marks the 50th anniversary of the Broadway debut of A Raisin in the Sun. Watching the play at Trinity Repertory Company, I was struck by how revelatory it must have seemed to audiences in 1959. 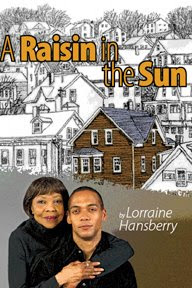 Here was a story about a striving, working-class black family at a time when positive depictions of black people were rare on stage or screen, if they were seen at all. It was Broadway's first drama by a black woman, Lorraine Hansberry; and the first with a black director, Lloyd Richards.

As the play opens, five people - three generations of the Younger family - are living in a cramped Chicago apartment in the late 1950s. Walter Lee Younger Sr. has passed away and his widow and children are waiting for a $10,000 death benefit from the insurance company. They have different, conflicting ideas for the money and how it can be spent to help them build a better life.

Trinity Rep veteran Barbara Meek, in her 105th production with the company, is terrific as matriarch Lena Younger. She holds this family together with great deal of courage and common sense and resiliency. She's the keeper of its history and its moral center.

Angela K. Thomas, an M.F.A. candidate at the Brown/Trinity Rep Consortium, is great as her college student daughter Beneatha, a confident, spirited young woman, forging her own identity at the dawn of the civil-rights movement.

I was a little less pleased with Joe Wilson Jr. as her son, Walter Lee Jr., and Lynnette R. Freeman, also a Brown/Trinity student, as his wife, Ruth.

Walter Lee works as a chauffeur and he has this rage that's supposed to be just below the surface. But Wilson was a bit too over the top. And while you can see how Freeman's Ruth has been worn down by her husband's weaknesses, she seemed a little young for the role, simply not as memorable a presence.

I liked the actors who played Beneatha's suitors. Jude Sandy is charming and idealistic as Joseph Asagai, a student from Nigeria who nurtures Beneatha's desire to connect to Africa. Charlie Hudson III hits just the right note as the preppy and well-off George Murchison. Dustin Isom and Nigel Richards alternate as Walter Lee and Ruth's young son, Travis.

The set design by Michael McGarty makes the Youngers' apartment small but extremely neat and tidy. Directed by Brian McEleney, this production also has a lot more humor than I remembered from the 1961 movie or the 2008 television version of the Broadway revival. Sometimes, I think the audience laughed a little too much in places where it veered close to being inappropriate.

The Youngers are a family in transition - proud, industrious, the people who work as housekeepers and chauffeurs and take in laundry and care for other people's children. They will not be intimidated, they will not let racism stand in the way of achieving the American Dream. They are the people that Broadway audiences of 50 years ago probably employed but never really knew.

The title of the play refers to a poem by Langston Hughes that asks, "What happens to a dream deferred?" A Raisin in the Sun is about the American Dream - what does it mean to different people, how do we achieve it and how do we react when it looks as though that dream is about to slip through our fingers.

Lorraine Hansberry died of cancer at age 34, in 1965, leaving a small body of work, including this classic play. Half a century later, A Raisin in the Sun remains a powerful, compelling drama about the importance of family and the dreams we hold in common. At a time when so many families of all backgrounds are struggling, it is every bit as relevant.
Posted by Esther at 8:30 PM