I'm a hopeless information junkie and usually when I go to the theatre, I know way too much about what I'm about to see. 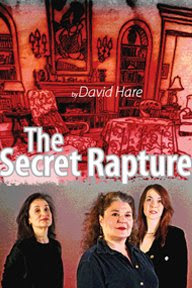 But this time, I didn't know very much about David Hare's The Secret Rapture, at Trinity Repertory Company, other than it was set in the 1980s, in Margaret Thatcher's England, and revolved around two sisters dealing with the aftermath of their father's death.

The sisters, Marion and Isobel, are polar opposites. Marion, played by Phyllis Kay, is a junior environment minister in Thatcher's Conservative government. She's blunt, unsentimental, all business. Isobel, a graphic designer played by Rachael Warren, is softer, compassionate, an idealist where Marion is a hard-headed realist.

Their stepmother, Katherine, is played by Anne Scurria with a vaguely northern accent, which I guess is supposed to highlight the class differences between them. Where Marion and Isobel are polished, educated and speak like the Royal Family, Katherine is brassy, unstable and an alcoholic. Even though I think Katherine is supposed to be played by a much younger woman, Scurria is terrific.

Rounding out the cast are Fred Warren Jr. as Marion's husband Tom, who tries to combine business with his born-again Christianity; Stephen Thorne as Irwin, Isobel's possessive boyfriend and partner in her design firm; and Patricia Lynn as Rhonda, Marion's flirtatious assistant.

The play moves pretty briskly through the first act, as the sisters bury their father, then try to figure out what to do with their demanding stepmother, who clearly can't take care of herself. Out of pity and a sense of obligation, Isobel gives Katherine a job. It's a decision that will have ramifications for her and for everyone else.

Hare, better known today for his screenplays for The Reader and The Hours, wrote The Secret Rapture in 1988. In an introduction, Trinity's artistic director, Curt Columbus, who also directed the play, calls it his "response to the political and social climate of that time, to a perceived sense that 'greed is good' had won out over good deeds."

One of the questions I think Hare asks is: Does a good person stand a chance?

Clearly Isobel, the "good" character, is the center of the play. She's an almost saintly figure who does her best to help everyone, no matter what the personal cost. Her role model is her father, a man who never made much money as a bookseller but was generous and admired. But she's up against a self-centered society that considers getting ahead the most important value.

The one criticism I have is that Hare paints Isobel with a broad brush. She's so innocent and easily manipulated by just about everyone else. Some people are that way, I guess. I wanted her to show some backbone, though. I mean, it's one thing to be compassionate and another thing to let people walk all over you. Right?

Still, there were parts of the play that definitely rang true, especially the way Isobel is persuaded to make decisions about her business that may not be in her best interest. I could definitely hear echoes of today's financial crisis, where so many people have been convinced to overextend themselves.

I have to admit that I left the theatre a little bewildered. Some things happen in Act II that I didn't expect at all. But the more I thought about it, the more it all began to fit together. And believe me, this is a story that you will leave the theatre thinking about.
Posted by Esther at 12:05 AM