It's Freedom to Marry Week

It's Freedom to Marry Week, a time to talk about love and equality and fairness.

If two unrelated adults who are in love, building a life together, in many cases raising children together, want the benefits and protections of marriage, they ought to get them. It shouldn't matter whether they're two men or two women or a man and a woman. It's a matter of equal protection under the law. 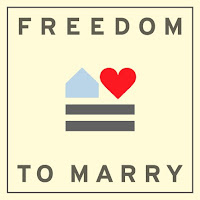 The campaign of fear, the scare tactics, that opponents of gay marriage use are deeply offensive to me. To imply that allowing gays and lesbians to marry threatens children or heterosexual marriage is bigotry, pure and simple. It's immoral and unAmerican.

My friends who are gay and lesbian pay taxes, are good citizens, decent people with the highest values. They shouldn't be treated like second-class citizens when it comes to marriage.

I look at their loving, committed relationships and I compare them to John Edwards and Eliot Spitzer and Mark Sanford, three heterosexual married men, with children, who did not take their vows seriously at all. I wonder: Who presents the real threat to the sanctity of "traditional marriage?"

I know how fortunate my friends feel to have found the love of their life. And I know how truly happy and fulfilling their lives are together. The longer I know them, the more strongly I feel that they should have the freedom to marry the person they love. They will certainly honor the sanctity of marriage better than Spitzer, Sanford and Edwards.

In Sunday's New York Times, Frank Rich wrote about the push to repeal "Don't Ask, Don't Tell," which prevents gays and lesbians in the military from serving their country openly. He said, "Most Americans recognize that being gay is not a 'lifestyle' but an immutable identity."

Like a lot of straight people, there was a time when I didn't know many people who were openly gay or lesbian. But times change and so, too, should our concept of equality. This comment sums up how I feel:

"As more gay people have come out — a process that accelerated once the modern gay rights movement emerged from the Stonewall riots of 1969 — so more heterosexuals have learned that they have gay relatives, friends, neighbors, teachers and co-workers. It is hard to deny our own fundamental rights to those we know, admire and love."

In the week leading up to Valentine's Day, that's a statement worth taking to heart.
Posted by Esther at 12:30 AM

Thanks for being such a strong advocate/ally. There's a lot of outspoken straight allies in the feminist circles I move in, but in less politically charged areas (like theatre), fewer people speak up.

Hey Dorian, thanks so much for the comment. It's easy, really. My friends mean so much to me, they've enriched my life to such a great extent, how could I "not" speak up for them?

I figure, my blog doesn't have a huge number of readers but at least it's another voice to drown out the haters.