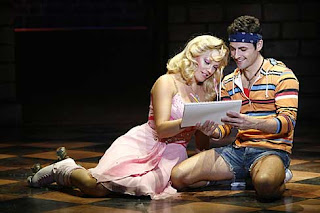 It's taken me awhile but my year of living theatrically, 2010 edition, is finally off the ground. Yesterday, I took in the tour of Xanadu at the Providence Performing Arts Center.

The musical is based on the 1980 movie with singer Olivia Newton-John. She plays a muse, Clio (aka Kira), who comes down from Mount Olympus to inspire a struggling artist in Venice Beach, Calif., named Sonny Malone. Sonny dreams of creating a roller disco at the site of an abandoned theater.

On the tour, Elizabeth Stanley plays Clio/Kira and Max von Essen is Sonny. Larry Marshall is Danny Maguire, the hard-nosed businessman who wants to tear down the building and turn it into condos.

Stanley, from the Broadway musical Cry-Baby, is pretty funny with her faux Australian accent. She spends most of the musical on roller skates, not an easy thing to do I imagine. Von Essen is sweet and goofy and so cute in his short shorts.

And I loved the two wisecracking sister muses who are extremely jealous rivals of Clio, played by Annie Golden and Amy Goldberger. I was especially excited to see Golden, who was in the movie version of Hair. They did a great rendition of Electric Light Orchestra's "Evil Woman."

I have to give book writer Douglas Carter Beane credit for the way he weaves in a refresher course on Greek mythology. He also takes some witty swipes at the current state of musical theatre but they got kind of tepid applause. Maybe they worked better on Broadway?

Xanadu has a score of catchy pop tunes that I really enjoyed, like the title track, "Magic," "Alive," "All Over the World" and "Have You Never Been Mellow?" After seeing more than a few overblown musicals, I like the fact that this is kind of an intimate show that doesn't take itself too seriously.

But I have to admit the plot of Xanadu felt kind of stretched out and while I laughed, I didn't think it was uproariously funny.

Part of it is, the musical may simply work better in a smaller venue. On Broadway, it played in the 597-seat Helen Hayes Theatre. PPAC has 3,000 seats. Sometimes you pick up on the enthusiasm of the people sitting around you, but the energy felt too dissipated in a big house.

Also, there was a major irritation that affected my enjoyment to the point where I'm knocking down Xanadu by half a star.

When I entered the theatre, I was so excited about my fourth-row orchestra seat that I didn't think about the row of speakers set up across the front of the stage. They hid the actors' feet.

Xanadu has tap dancing and roller skating - I wanted to see feet. As it was, I saw the top of Stanley's leg warmers. Dan Knechtges' choreography was lost on me.

Afterward, I spoke to a crew member who told me that the speakers were put on the stage so those of us in the first few rows could hear better. Maybe so but I never remember having my view of the stage blocked like that before.

The tour runs through the beginning of May and the next stop is Pittsburgh's Benedum Center. I don't know what the setup will be like in other cities but this is one show where you might want to sit a little farther back.

So overall, Xanadu was a fun and frothy way to spend 90 minutes on a chilly February afternoon, not a bad way to start off my year of theatergoing. And best of all, it's only the beginning!
Posted by Esther at 12:10 PM

Wow, 3000 seats? That is like the *worst* possible venue for Xanadu. Oy. But I guess seeing it in a Greek amphitheater is better than not seeing it at all.

Glad you had fun.

Have you seen the movie Xanadu? I saw the movie shortly before the musical, and a lot of the laughs come from the fact that the movie is just so ridiculous. Douglas Carter Beane did such a good job of poking fun at that. I'm sorry that the speakers blocked your view, but I'm glad you were able to enjoy the show anyway.

Hey Chris, that's a problem I've noticed in many touring productions. Avenue Q also played at PPAC and it also felt lost. I bet Providence isn't unique. Most small cities have "one" theatre that hosts Broadway shows and it can be much, much bigger than the Broadway venue.

Hey Linda, I did see the movie around the time the musical came out but that was a couple of years ago. Maybe I should have refreshed my memory! I don't know whether I'm making too big a deal of the speakers but it just annoyed me in a musical with a lot of dancing - not to mention roller skating. OTOH, I really liked the scene where Clio/Kira is lifted up into the air, maybe because I could see her feet!

What a bummer about the speakers. That would have upset me as well. Believe it or not, I had tickets to see Xanadu on opening night (I have seasons tickets to PPAC) and I didn't go. *don't throw garbage at me* My daughter, who was supposed to go with me, backed out at the last minute and I couldn't find anyone else to go. Plus, I wasn't that intersted in this show and I was really feeling overwhelmed that day. I was afraid I would regret this decision, but after reading the reviews in the paper and your description here, I'm not sorry I missed it. Sometimes you just need to take care of yourself. *shrugs*

Hey Pam! I think Xanadu just got kind of overwhelmed in such a big theatre. And yeah, the speakers blocking the stage did bother me hugely. Anyway, you're right, no need to sweat it. There'll be other shows!

Oh, bummer. This is what I feared would happen to Xanadu: the national tour. It's lost on those big auditorium stages.

The Chicago production was at the Drury Lane Water Tower, a 550 seat space. I sat onstage, which I think made all the difference.

Hey Bob! Yeah, like I said, in a lot of cities there really isn't a second option for a touring Broadway production.

I wondered how the onstage seats would be at Xanadu since some of them were at the back, and you'd be looking at the actors' backs for a big part of the show. But on the plus side, at least you'd get to see their feet!