Elie Wiesel versus a playwright

File this one under: What was she thinking?

A play by Deb Margolin that included a fictitious conversation between Bernard Madoff and Elie Wiesel in Madoff's jail cell has been canceled. 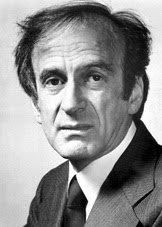 Wiesel, among those fleeced by the disgraced financier, objected to his depiction in "Imagining Madoff" and threatened legal action if it were performed at the Jewish theatre troupe Theater J in Washington.

Margolin, a performance artist who teaches theatre at Yale, says her intention was to use Wiesel as a foil for Madoff because “his name is synonymous with decency, morality, the struggle for human dignity and kindness.” 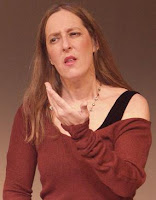 She says she was "devastated by his response" in a letter Wiesel wrote to her. I'll bet. I imagine that having your work described as "obscene" and "defamatory" by a Holocaust survivor and Nobel Peace Prize laureate must be humbling.
Update: The conversation continues at Parabasis, where Margolin comments.

This episode does raise some interesting questions.

What obligations do playwrights have when they depict real people? Must they adhere to the truth, the historical record, or can they use their imaginations?

Update 2: NPR interviewed lawyer and Columbia University lecturer Richard Lehv, who specializes in intellectual property, about what rights a living person has when they're fictionalized.

Personally, I do think you have to take some care when dealing with historical figures, with people who are still alive. But I also think artists should be free to experiment. It's a difficult balance and I'm not going to pretend I always know the right answer.

Two plays I've seen on Broadway, Mary Stuart and The Farnsworth Invention, have included imagined meetings between historical figures. (There are probably others that I've forgotten. It's practically a literary genre all its own.)

A crucial scene in the play Mary Stuart involves a confrontation between Mary, Queen of Scots and Queen Elizabeth I that never happened. The historical accuracy of Aaron Sorkin's play The Farnsworth Invention has been questioned and likewise includes a fictitious meeting between the main characters.

Of course, the real people who are at the center of those plays have died. I didn't get a chance to see Enron but I wonder whether playwright Lucy Prebble received any correspondence from the very much alive Jeffrey Skilling and Andrew Fastow.

Since they're both serving prison sentences in connection with the collapse of the Houston-based energy company I guess they could hardly claim their reputations have been damaged. Perhaps that's something for playwrights to keep in mind.
Posted by Esther at 3:15 PM

A similar type of play we saw in SF was called "Terre Haute" by Edmund White. It is a fictional encounter between the Oklahoma bomber Timothy McVeigh and a character similar to author Gore Vidal in the days prior to the former's execution. Review of NYT when it played there last year: http://theater.nytimes.com/2009/01/20/theater/reviews/20terr.html

Thanks. I did hear about that play in New York. It's a tough question when you're dealing with someone who's still living. I don't want to restrict anyone's intellectual or artistic freedom but I do wonder to what extent someone has control over how they're portrayed? Especially if they have a reputation to lose.