I'm so sorry I never had a chance to meet Associated Press drama critic Michael Kuchwara, who died Saturday at age 63. He was widely admired as a generous person, a fair-minded critic and a hardworking reporter.

One quote struck me from the AP obituary. In a 2006 American Theatre Wing video Kuchwara said, "I'm writing for an audience that may never see the shows that I'm writing about." 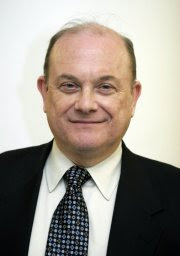 It's a reminder that he began covering Broadway in 1984, when the Internet was still in its infancy.

If you lived outside of the New York City area and you loved theatre it was probably Kuchwara's reviews and articles that you read, hanging on every word that made its way into the local paper.

Perhaps you dreamed of getting to the Great White Way, as a performer or in the audience at a Broadway show. I don't think I'm exaggerating when I say that Kuchwara's reviews most likely played a role in nurturing those dreams.

Of course it's much easier now for far-flung theatre fans to follow Broadway from an abundance of Web sites.

But Kuchwara's reviews and stories were the most widely disseminated of any critic. He brought a bit of Broadway and 0ff-Broadway to readers in big cities and small towns across the United States and Canada.

And Kuchwara had a job that requires great skill from a writer. Anyone can write long and complex, filled with insider jargon. Not everyone can write clear and concise and accessible to all. (Here are some of his recent reviews.)

Michael Kuchwara was able to spend a good part of his professional life doing something he loved, no small accomplishment. From reading the tributes that have been coming in, it's clear that the theatre community has lost a great champion.
Posted by Esther at 1:10 PM

This was a really sweet tribute. Truly a loss for the theater community.

Thanks Linda. I do wish I'd had a chance to meet him. From all the tributes I've read it sounds like Mr. Kuchwara was as generous to those he'd just met as he was to old friends.