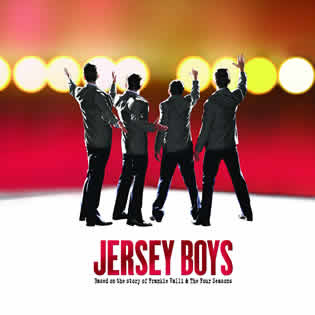 Jersey Boys, at the Providence Performing Arts Center.
Gratuitous Violins rating: *** out of ****

My verdict: Jersey Boys is a pretty entertaining 2 1/2 hours. Marshall Brickman and Rick Elice do a good job telling the story of Frankie Valli and The Four Seasons. And the musical numbers, with Sergio Trujillo's choreography, are terrific. I wish they'd gone on longer.

I enjoyed learning how four blue-collar kids from New Jersey - Valli, Nick Massi, Tommy DeVito and Bob Gaudio - came together to form a band. It was a time, as one of them explains, when young men from the neighborhood had three choices: join the Army, get mobbed up or become a star.

Brickman (an Oscar winner for co-writing one of my favorite movies, Annie Hall) and Elice make each one memorable - Valli the quiet kid with the sweet falsetto, Massi the group's self-described "Ringo Starr," Gaudio the songwriter who's afraid he won't be able to repeat his early success, and DeVito the one who can't seem to stay out of trouble.

The storytelling in Jersey Boys isn't perfect. For one thing, did people really use the f-word that much in 1960? And after a snappy first act, leading up to The Four Seasons' first hit, "Sherry," I thought the second act dragged a bit. (Also, some of the songs seemed to get cut short.)

But I got a good sense of what kept the four together and the pressures that threatened to split them up. I liked the performances: Ryan Jesse as Gaudio, Matt Bailey as DeVito, Steve Gouveia as Massi and especially the dynamic Joseph Leo Bwarie as Frankie Valli. When they were singing, it was like being at a concert back in the day.

What surprised me about Jersey Boys was how many songs I knew that I didn't even know were Four Seasons songs: "Sherry," "Walk Like A Man," "Big Girls Don't Cry," "Can't Take My Eyes Off of You," "Working My Way Back To You," "December 1963 (Oh What A Night)."

Those songs - many of them written by Gaudio and producer Bob Crewe - are reminders of a time when catchy, 3-minute pop tunes ruled the airwaves. For me, and I think for a lot of other people in the audience, swaying to that music was when Jersey Boys truly came alive.
Posted by Esther at 9:10 PM

You had several of the same cast members as I did a couple of years ago. Namely Joseph Leo Bwarie who I thought was almost better on the songs than Valli himself. His voice was just so pure. I felt the story dragged a bit but that the energy of the songs is what the show is really about. I enjoyed it much more than I expected since I was going with my father-in-law! I felt like I was at a concert.

Hey Linz, thanks for the comment! I need to get some original Four Seasons songs from iTunes because I think it's been awhile since I've listened to Frankie Valli.

But I definitely agree with you about the songs providing the real energy. The audience was just lapping it up - I was in the midst of a real Four Seasons demographic. And JLeo is so sweet! I loved the dance moves, too. I have to become a fan on his FB page.

I was surprised how much I enjoyed myself. It wasn't earth-shattering but a really entertaining way to spend 2 1/2 hours on a Sunday afternoon.

I didn't really love Gouveia (probably the weakest of any cast of the 3 I've seen) but yes, Bwarie was amazing. Glad you liked the show! I think it's a well done slick and entertaining production.

I really did enjoy it but I also think part of my enthusiasm stems from the fact that it was my first theatre outing in a month.

Still, there have been touring productions I haven't liked as much so it's not like JB gets a free pass just for showing up. Like you said, it really is entertaining.

You know, I really did not like Jersey Boys when I saw the original cast. I felt like I was watching a VH1 "Behind the Music" episode. I thought the performances were very good, but got really annoyed at the start/stop nature of the songs, and more than 2/3 of them were not sung to completion. I guess I was disappointed because for all the hype, I was left cold - a bland music history lesson at best.

I know I'm in the minority here, and am actually relieved to read your comments, Esther, that reflect that the show is good, not great. For me, it was yet another show that had a TON of potential and didn't utilize half of it.

PS: Good for you completing your seeing of all nominated shows for years! I love when there are no holes! Now, I have to get to Fela! LOL!

Hi Esther! Am loving your blog! I missed Jersey Boys, but thanks for your great write up! See you soon! Holly :)

Yeah, I definitely agree about the stop/start nature of the songs. And they're not long ones to begin with!

In some ways I think the biographies were a little superficial. Besides Valli, we don't really learn a lot about the personal lives of the other Four Seasons. I thought the story was interesting but it didn't really hit me on a deep, emotional level maybe because we just skimmed the surface. But like I said, I did enjoy it!

And keep in mind, it wasn't like I saw Jersey Boys out of 40 Broadway shows. I saw it as an alternative to my usual Sunday routine of running errands or spending some time at Borders in the mall. Not a lot of competition!

Yes, I'm proud of plugging that hole. I may never have another streak like it!

Holly, thanks so much for reading my blog and for leaving a comment! You still have a few days for Jersey Boys. It's here through Sunday.

I was also quite disappointed in the show. Perhaps my expectations were higher than they should have been with all the positive buzz. I found it more compelling trying to calculate the alarming speed with which the background scenery pieces flew off and on stage!

Thanks for the comment Dale! For me, it was a matter of what's the alternative. If I'd picked it out of 40 Broadway shows, or if I had more to choose from locally, I might have been a bit more picky. But I didn't have anything else on my plate and I truly enjoyed learning about the Four Seasons and hearing the music. Maybe they've cut down on the background scenery because I didn't notice anything alarming. ;-)