The Tonys and marketing Broadway 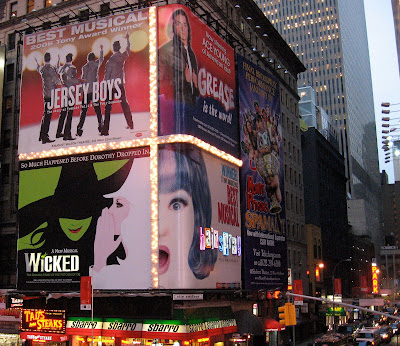 Just about everyone else has weighed in on Hunter Foster's Facebook group "Give the Tonys Back to Broadway," so here's my 2 cents.

Like the other major awards shows, there are two sides to the Tony Awards. They're supposed to celebrate the best in terms of artistic achievement and act as a marketing tool.

The producers of the Emmys, Oscars and Grammys have it easy. You watch the ceremony and you want to see the TV show or movie or listen to the song, it's cheap and simple.

The Broadway League and the American Theatre Wing have more of a challenge.

A theatre fan watching far from Broadway faces the prospect of shelling out $1,000 for a weekend in New York City. And with tourists buying 63 percent of the tickets, that's the audience the show has to reach.

(I wonder why more isn't done to promote the Tonys at theatres that present Broadway tours? And don't think about moving the broadcast from CBS to PBS. I bet some stations either won't carry it or would air it at 3 a.m. a week later.)

Before I became a regular theatergoer, one of the few times I remember watching the Tony Awards was in 2005.

I don't know what made me tune in but it may have had something to do with Spamalot being a Best Musical nominee. I'd been a big Monty Python fan as a teenager.

I watched the cast of The 25th Annual Putnam County Spelling Bee, and they were hilarious. I remember Victoria Clark winning for Best Actress in a Musical for The Light in the Piazza and Norbert Leo Butz winning Best Actor for Dirty Rotten Scoundrels.

Sad to say, neither name meant anything to me and nothing compelled me to start looking into tickets and hotel reservations.

That came a couple years later, when I found out Kevin Spacey, one of my favorite actors, was going to be in A Moon for the Misbegotten. I wanted to see him on Broadway more than anything. And I did - twice.

So, I could have done with less Green Day and Glee and more Marian Seldes and Kate Baldwin on the Tony broadcast. I wish more of the awards could be televised, more of my favorite theatre actors serve as presenters and a better job be done showcasing plays.

All I know is, since 2007 I've attended dozens of shows on Broadway, off Broadway and elsewhere. I'm the go-to person for friends who need some advice about visiting New York City and seeing a show. Now, some of my favorite actors are people you've never heard of unless you follow theatre.

Without the draw of Kevin Spacey, a movie star, none of that would have happened.

Believe me, the prospect of seeing a favorite actor onstage is thrilling. Sure, they have to do their part by being up to the job. But when it works, the experience can turn a very casual theatergoer into a passionate fan.
Posted by Esther at 9:30 AM

I completely agree with you. Star-casting makes the most economic sense for productions and presents a great way to market a show to a wider audience. If star-casting exposes more people to theater, why would we want to stop that?

Thanks for the comment, Timothy. I've seen and loved some great actors on Broadway who are virtually unknown to the general public. But none of that would have happened if I hadn't been lured to Broadway first to see Kevin Spacey. So hopefully people come for the "star" and keep coming back to see great theatre.