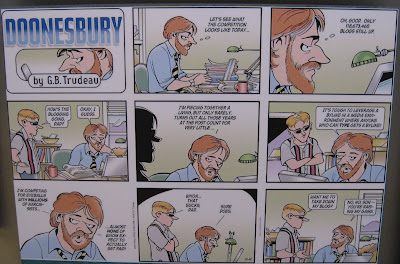 I didn't realize Doonesbury was turning 40 this year until I saw a big retrospective in Slate, including an interview with Garry Trudeau.

I haven't read the strip regularly in years but it used to be my favorite. I even have the cast recording of the musical Doonesbury, which lasted about three months on Broadway in the mid-1980s.

I love the way Doonesbury has always been so much a part of its time - skewering politics and culture with a quirky cast of characters. It was always witty and irreverent, tackling serious topics with humor and sensitivity.

I even remember some of the classic lines, like Mark Slackmeyer's controversial "Guilty, Guilty, Guilty," about Nixon's attorney general John Mitchell. And little Ellie's excitement at the daycare center when she finds out she has a sister: "It's a baby woman!"

Uncle Duke, based on journalist Hunter S. Thompson, was in one of my favorites - I had it on my refrigerator for years. He's speaking at a college and a student asks him for advice on a career in journalism. Duke's answer is predictably over the top and the cowered student is possibly rethinking his career choice.

I can't pinpoint exactly when I began to lose interest but looking over this list of the 200 greatest moments, it was probably around the mid 1990s. I don't know why. Maybe there grew to be too many characters and stories. Somewhere along the line it became less of a "must read" for me.

Anyway, it was fun to see a recent Doonesbury on display, topical as ever, when I visited the Newseum. That's former hotshot Washington Post reporter Rick Redfern trying to make a go of it as a blogger after he's laid off.
Posted by Esther at 9:45 AM