People write memoirs to talk about their difficult childhoods, tout their accomplishments, describe the obstacles they've overcome in life. I think Patti LuPone wrote Patti LuPone: A Memoir to settle some scores.

The book was penned "with" Digby Diehl, who's worked on several celebrity autobiographies. But I've listened to a few lengthy interviews with LuPone and the tone is all hers. If you're interested in theatre, it's a brisk and entertaining read.

LuPone makes it clear that she hasn't had it easy - from the time she put on tap shoes to make her stage debut at age 4 in Northport, Long Island, in 1953 to winning her second Tony, for Best Actress in a Musical for Gypsy, in 2008.

It's all interesting, from being part of the first class in the Juilliard School's Drama Division, run by the imperious John Houseman, crisscrossing the country with The Acting Company, her long relationship with Kevin Kline, her triumph in Evita, the epic battle with Andrew Lloyd Webber during Sunset Boulevard, and her most recent Broadway runs. 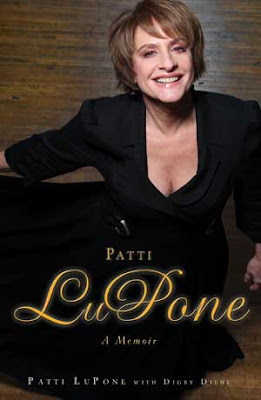 Frankly, I was kind of shocked that she even got cast in Evita. LuPone admits that she was vocally unprepared for the role. Luckily, a member of the chorus helped her with her technique so she could actually sing it. Yikes!

You get a sense from the memoir of the vagabond life of a performer, especially one who's focused her career on the stage. But I have to say, despite having spent her entire adult life as an actress, she hasn't seemed to enjoy it very much.

With the exception of Sweeney Todd and Gypsy, it appears that LuPone has had to put up with incompetent directors, boorish costars or devious producers just about every time she's been on stage, on TV or in a movie.

Now, I love LuPone as a performer - I was a big fan of the TV series Life Goes On, which is where I became aware of her. And seeing her in Gypsy - first at Encores and then on Broadway - was unforgettable. I also got her autograph at the stage door at City Center, so she gets high marks for that.

But I wouldn't want to get on her bad side. She comes across as loyal to her friends and brutal toward anyone who rubs her the wrong way, anyone she feels has slighted her. Sometimes, it's probably justified. But other times, I don't know.

For example, John Berry, director of The Baker's Wife: "was an obnoxious human being with absolutely revolting personal hygiene." As for Bill Smitrovich, who played her husband in Life Goes On: "I faced a seven-year sentence with a thoroughly distasteful man."

Still, there are plenty of people she adores, including Marian Seldes, her Juilliard teacher, who "had an unfailing confidence in my ability. She was also my biggest defender." And Evita costar Mandy Patinkin "is an angel for me; he was heaven-sent. I will love him forever." She also has nice things to say about her husband and son.

Amid all the kvetching (and there's a lot of it) LuPone's love for the theatre, for Broadway, does come through. She's very much taken with the traditions, the rituals of the stage. I like this quote: "What is theatre if it doesn't incite, doesn't move, doesn't change us in some way?"

But here's the most interesting thing I learned from reading her memoir:

When I saw Gypsy at Encores in 2007, Marian Seldes was sitting across the aisle from me. At intermission, I told her how much I'd enjoyed seeing her on Broadway in Deuce.

We talked for a moment about LuPone. Like me, Miss Seldes was enthralled with her performance. At the time, I thought it was simply one actress admiring the work of another. I didn't realize that it was a beloved teacher watching her former student in the role of a lifetime.

I LOVE the story re: Seldes. LOVE. Thanks for sharing!

Thanks, Bob! Yeah I had one of those duh! moments when I read about how Marian was Patti's champion at Juilliard. I'm sure Patti knew that Marian was in the audience that night at Gypsy. Makes the whole experience even more memorable.